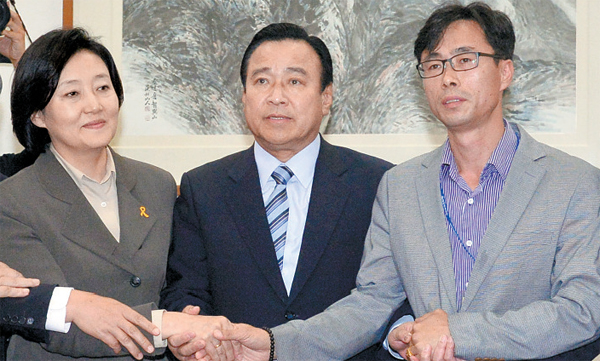 Park Young-sun, left, floor leader of the opposition New Politics Alliance for Democracy, Lee Wan-koo, center, floor leader of the ruling Saenuri Party, and Jeon Myeong-seon, representative of the families of student victims, gather yesterday at the National Assembly before they have three-way negotiations over the special Sewol law. [NEWSIS]

Floor leaders of both the ruling Saenuri Party and the main opposition New Politics Alliance for Democracy (NPAD) met with the head of the committee representing the relatives of victims of the Sewol ferry sinking at the National Assembly to enter negotiations to seek a deal on a special law to investigate the tragedy.

But the meeting did not produce a breakthrough, and they promised to try again today.

This is the first time that any leader of the two main parties - the Saenuri’s Lee Wan-koo and the NPAD’s Park Young-sun - invited the head of the Sewol Family Countermeasure Committee to discuss the special law. Failure to come up with a bill acceptable to all three sides has paralyzed the National Assembly for the past five months. Some 90 bills have been stuck in the Assembly due to the gridlock.

The meeting came a day after NPAD leader Moon Hee-sang proposed a meeting with his Saenuri Party counterpart in order to find some middle ground.

Saenuri’s Lee told the press after the nearly three-hour meeting that the participants decided not to disclose what was discussed. He also said it was not discussed whether the NPAD would join a plenary session of the Assembly scheduled for today.

Not a single bill was passed by the Assembly in the past 150 days and the Saenuri was set to deal with the pending bills at a plenary session on Sept. 26.

Opposition lawmakers boycotted the session and asked for it to be rescheduled after they gathered opinions from party members over the weekend to straighten out their stance.

Assembly Speaker Chung Eui-hwa closed the plenary session in less than 10 minutes and rescheduled another session for today. The Saenuri now has a plan to push through the bills on its own should the opposition again refuse to join in on a vote.

Chung told the JoongAng Ilbo yesterday that he would hold the session today and push through the long-pending bills “without fail.”

“That is an open declaration to the people,” he said.

“It would be best if the opposition party joins the session. I hope the opposition makes a hard decision toward normalization of the Assembly, but it can’t be helped if it doesn’t come.”

Before yesterday’s meeting, conflict within the liberal NPAD - between hard-liners and centrists - was exposed. At one point, leader Park went into hiding after being roundly criticized and threatened to leave the party, which she withdrew later.

The inner feuds have dealt a blow to the party’s approval ratings. According to the poll agency Realmeter, the approval rating for the party stood at 18 percent between Sept. 22 and 26, down 2.7 percent from a week earlier.

That number is nearly half the 42.4 percent the party enjoyed in the wake of an announcement by former joint leaders Kim Han-gill and Ahn Cheol-soo to merge their political factions to create the NPAD in March.

On the other hand, the Saenuri had its approval rating rise 2.5 percent on week to 44.2 percent over the same period.