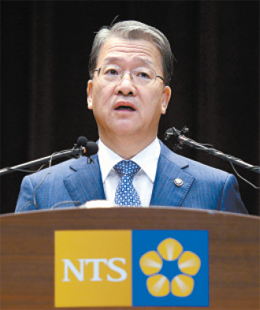 As many as 1.31 million small and medium-size businesses with annual sales of less than 100 billion won ($94.9 million) will be exempt from tax audits until late 2015.

The National Tax Service said yesterday that the waiver will help small businesses struggling to make ends meet amid a prolonged economic downturn.

“The NTS decided to support efforts to boost the economy on a governmental level in terms of tax administration,” said Lim Hwan-soo, chief of the tax authority, at a meeting with heads of regional tax offices held at NTS headquarters in Jongno District, central Seoul, yesterday.

This is not the first time the government refrained from auditing businesses, although the previous blanket waivers were given at times of extreme duress. Small businesses were exempt from tax audits when the country was hit by the Asian financial crisis in 1998, the worst economic period in modern history for Korea, and also in 2008, after the U.S.-led global financial crisis.

The NTS selected 1.08 million small businesses that it found to be suffering from financial difficulties in the current downturn, and 220,000 start-ups in what is considered the country’s future growth engines - the cultural content industry, knowledge-based industries and traditional manufacturing industries, or so-called root industries like molding.

Small eateries, accommodation facilities, tourism and transportation businesses, and agricultural and fisheries businesses with less than 1 billion won in annual sales are also included. Small construction, shipping and shipbuilding companies are on the list, as the authority designated the three areas “currently vulnerable sectors.”

If some of these businesses are currently under tax audits or investigations, the authority will put an end to them soon.

The total number of companies to be exempt may be more than 1.31 million since the authority will extend the same benefit to those that plan to expand employment. Companies with less than 100 billion won in sales should increase hiring of employees by 4 percent if they want to avoid tax audits. They are required to submit employment expansion plans to the NTS by the end of October.

Those with liquidity problems will also get extended due dates for tax payments, delays of tax collections, delays of dispositions for unpaid taxes and early return of value-added taxes, the authority said.

“It is one of the most important missions of the NTS, to share difficulties with the people,” Lim said. “When the economy is bad, the key paradigm for the tax administration should be helping taxpayers focus on their own work.”

The Business Sentiment Index (BSI), which measures local companies’ sentiment about the general economy, stood at 96 for SMEs. An indicator below 100 shows that companies are negative about the current situation.

“Since the Sewol tragedy, domestic consumption is showing no signs of recovering,” said Cho Seong-hoon, a professor at Yonsei University. “Local companies, especially smaller ones, are going to struggle even more in the second half of the year.”