Banks see a future in retirement

Banks see a future in retirement

A 51-year-old who works at a small to midsize company wants to retire about four years from now. But all he has to look forward to is a small retirement paycheck and a few bucks he has in his checking account; the 1.6 million won ($1,519) national pension fund he is entitled to will not be delivered to his doorstep each month until he turns 65.

In the 10 years following his retirement, he will have no additional income unless he gets a new job, which would be difficult. His current monthly paycheck is about 4 million won. If he wants to maintain his current lifestyle after retirement, he would need to make 60 to 70 percent of his current salary. The national pension fund combined with his retirement payments would amount to far less.

“My biggest concern is that I don’t know how long I will live considering how the average life expectancy is continuously expanding,” said the man, who requested anonymity.

Although he has a friend in the insurance business and his brother-in-law works at a brokerage firm, he has never been to a financial institution other than a bank because he didn’t want to lose his earnings on a bad investment.

“Even new recruits that just joined the company want to have retirement consultation,” said the head of a bank branch in Gangnam District, who asked to be referred to by his family name, Kang.

He said that many new hires ask about pension options when they open their first salary bank account.

“I could actually feel how the world has changed compared to the early 2000s when it was customers who were only a few days away from retirement or those who have already retired that came to the bank with their retirement pay to get consultation,” Kang said.

As interest in signing up for a retirement plan has grown significantly, banks are jumping into the market more aggressively than in the past.

Retirement traditionally was dominated by insurance and brokerage firms in Korea.

The weapon banks have that insurance firms do not is a wide network of branches, which has raised alarms over increasing competition in the field. 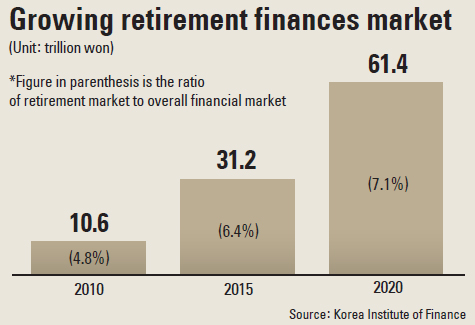 Hana Financial Group also has started a retirement plan on Sunday that collaborates with financial affiliates of the banking group - Hana Daetoo Securities, Hana Life and Hana SK Card. Including the existing retirement planning services, a customer can open a bank account, invest in funds, subscribe to an insurance policy and receive a credit card under a single product.

Banks have the upper hand over other financial institutions because even if customers never subscribed to an insurance policy or invested in stocks, they still have a bank account.

This allows the banks to approach customers more easily and vice versa. 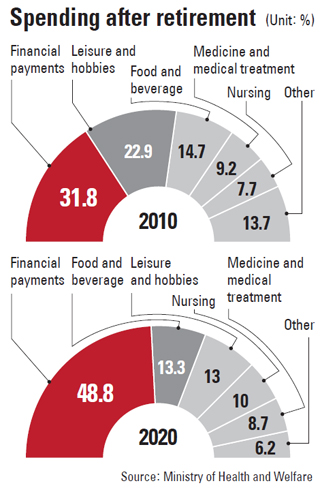 “Retirees receive their national pension payments or private pension payments through their bank account,” said Kim Jin-young, head of Shinhan Bank’s future planning center. “Banks have the advantage against insurers, who have no accounts, and brokerage firms that have a complex and inconvenient cash management account [CMA].”

Managing the financial structure of retirees or those planning for retirement in a single account is appealing to more customers.

“Some advise me to subscribe to a private pension policy and others advise me to buy bonds. At this point, I don’t really know what I need to do,” said Lee, 39, who has worked at a company for 13 years.

Lackluster profits from investments that were promised by insurance and brokerage firms are giving the banks an even bigger edge.

For the banking industry, which is struggling from worsening profitability, the retirement finance market could be the only solution for survival.

“Other than expanding overseas, the only area that has growth potential in the local market is the retirement market,” said an executive at a bank who requested anonymity.

Experts say the local retirement financial market in 2010 was 10.6 trillion won. This is likely to expand to 30.2 trillion won next year and double to 61.4 trillion won in 2020.

“Even if banks are jumping into the market, there is a limit to selling products by simply reorganizing and rearranging existing products,” said Lee Jae-yeon, a researcher at the Korea Institute of Finance. “The financial company that offers new services whose products are customized to the need of retirees will come out as the victor in the end.”