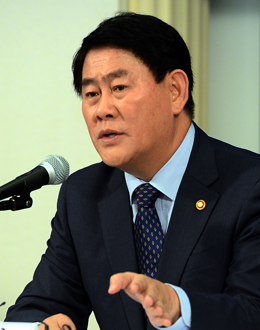 Choi Kyung-hwan, the deputy prime minister for the economy and finance minister, said there will be no tax increases at the moment, although he left room for possible hikes in the future.

Choi made remarks about several issues regarding the national economy at a public debate yesterday at the Press Center in Gwanghwamun, central Seoul.

“At this stage, whether it be direct or indirect, there will be no tax increases,” Choi said at the event hosted by the Kwanhun Club, an organization representing more than 1,000 senior journalists around the country.

“The basic attitude of the government is to hold off as long as it can [without additional taxation].”

The government’s plan to raise the residential and automobile taxes is justified considering the rates for the two taxes were set a long time ago, according to Choi.

“The residential tax rate was set 22 years ago, while the auto tax rate has been kept since 10 years ago,” he said. “During that period, consumer prices soared about five times. Rather than calling them tax raises, it is more correct to say ‘adjustment to current prices.’”

The minister, however, hinted at possible rate hikes in the future.

“This year and next year, tax revenues will fall short of the government’s goal, but we will do whatever it takes to revive the economy and find tax sources by tapping the underground economy to plug the hole,” the minister said. “But, if the situation goes beyond that, the government may possibly raise taxes based on the general public’s consensus.”

The recent announcement of a hike in the average price of cigarettes to 4,500 won ($4.24) a pack is largely aimed at improving public health, not at raising revenues, he said.

“Estimated tax revenues from the increased cigarette prices is about 2.8 trillion won, but the government will spend more than that on programs to help improve people’s health, including adding 900 billion won to the National Health Promotion Fund,” he said.

As for the government’s move to reform the pension system for civil servants, which triggered a backlash from the Korean Government Employees’ Union (KGEU), Choi emphasized the importance of such reform.

“The government employees’ pension is like a time bomb,” Choi said. “Reform of the system is necessary.”

The total deficit of the civil servant pension scheme has reached 2.5 trillion won, and the figure will rise further to 4 trillion won, the minister explained.

“The deficit is rising at a fast rate,” he said. “The deficit will keep rising further in the course of time.”

Considering the strong opposition from the civil servants’ union, the government and the ruling and opposition parties need to put their heads together to resolve the issue, he added.

The KGEU protested the plan on Saturday by marching in downtown Seoul.