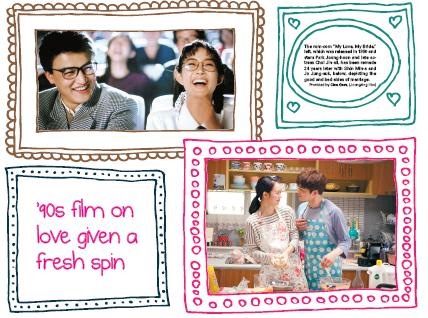 The rom-com “My Love, My Bride,” left, which was released in 1990 and stars Park Joong-hoon and late actress Choi Jin-sil, has been remade 24 years later with Shin Min-a and Jo Jung-suk, below, depicting the good and bad sides of marriage. Provided by Cine Guru, [JoongAng Ilbo]

Even in a fast-paced world where what’s new today is old tomorrow, the basic template of human emotion has not changed that much, especially regarding love and marriage.

More than 20 years have passed since director Lee Myung-se released the rom-com “My Love, My Bride” in 1990, but its remake, with a different director and cast members, still revolves around universal issues related to romantic relationships, marital affairs and overcoming conflicts.

“I think there are many definitions of the concept of love,” said the remake’s director, Lim Chan-sang, at a press conference held Sept. 24 in Wangsimni, Seongdong District, central Seoul. “There might be a single piercing definition, but what I wanted to show was how love changes over time after getting married and the way that people accept it.”

Replacing Park Joong-hoon and late actress Choi Jin-sil from the original version are actors Shin Min-a and Jo Jung-suk, who joined forces to play the protagonists Mi-young and Young-min, a couple that met in college four years earlier.

The movie opens with Young-min texting his friends about proposing to Mi-young. Various replies follow such as “don’t do it,” from a buddy who has been married twice, and “how can you do this to me” from a friend who has never had a girlfriend.

As well as bringing the story’s setting into our technology-driven age, Lim also showcases contemporary perceptions of love and marriage in order to relate to today’s audience and reflect current social trends.

While getting divorced or staying single was considered odd in the 1990s, Korea’s divorce rate is now one of the highest among members of the Organization for Economic Cooperation and Development and its number of unmarried people is on the rise.

In the original version, Mi-young is a housekeeper who is sensitive to her husband’s whereabouts - reflecting more traditional Korean attitudes of the time - but in the remake, she is an art teacher at an academy. At one point, the film shows her working overnight and feeling stressed about it causing a conflict in her marriage.

Conforming to the pervasive expectations of women in Korea during the ’90s, the old Mi-young is shown repressing her anger while traveling on a bus, contemplating the problems of her relationship until she reaches the last stop. But the new Mi-young calls a friend to have a drink and talk.

One sparkling scene from the first film that didn’t make the cut in the second follows the newlyweds on their honeymoon. Director Lee Myung-se used the subject wisely in the original to induce laughter by showing the couple feeling flustered about finally spending the night together. It’s remembered by many viewers as the movie’s best scene.

But in the remake, the honeymoon sequence is nowhere to be seen. When Lim was asked about why he had omitted it, he laughed and said, “I took out the episode because these days a lot of couples spend the night together before getting married.”

There may be some variations between both movies, but the gist did not change. Marriage starts out with thrill and romance, but, inevitably, the disjunction between reality and fantasy triggers conflicts. But then again, committing to another person and getting to know their habits allows a relationship to evolve.

“I have always felt positive about getting married, but after shooting the film, the thought got even stronger,” said Jo.

“Before the film, I thought marriage was something that’s very far away, but the idea has changed as I now believe I can overcome conflicts coming from being married,” said Shin.