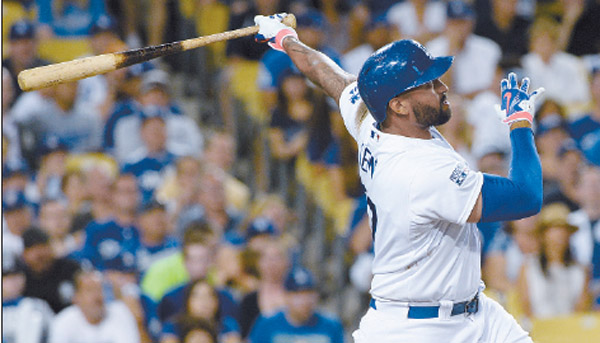 Matt Kemp yanked the Dodgers from the depths of despair with one swing.

Kemp hit a go-ahead home run leading off the eighth inning, lifting Los Angeles to a 3-2 win over the St. Louis Cardinals on Saturday night and evening their National League Division Series at a game apiece.

Kemp practically skipped down the first base line, appearing to coax the ball fair as it sailed inside the foul pole and landed in the lower left field seats while the crowd of 54,599 erupted in cheers. Bubbles percolated into the hot night air from a machine in the dugout that the Dodgers turn on to celebrate homers.

No one looked happier greeting Kemp in the dugout than a once-distraught J.P. Howell, who had served up a tying, two-run homer to Matt Carpenter in the top of the inning after relieving Zack Greinke. Kemp hugged Howell, who pointed skyward in relief, after connecting against Pat Neshek for his fifth hit in the best-of-five series.

Brandon League got his first career postseason win with a scoreless inning of relief. Kenley Jansen retired the side in the ninth to earn the save.

Greinke belatedly took the mound in the eighth after his teammates had already taken their positions. Manager Don Mattingly came out to get him, and Greinke left to a standing ovation.

Howell took over and promptly gave up a single to pinch-hitter Oscar Tavares before Carpenter tied it at 2.