Pfc. Park Cheol-in stands on guard duty Wednesday night on the western front line. Park, whose mother is Japanese, would have been exempted from serving in the military if he gave up his Korean citizenship, but decided to enlist instead. By Shin In-seop

When the reveille sounded at 7 a.m. at the barracks of the Invincible Sword Unit last Wednesday, Private First Class Park Cheol-in got up quickly and headed to duty. The nation was celebrating Armed Forces Day that day, and Park’s unit, located around 10 kilometers (6.2 miles) south of the western inter-Korean border, started the day by singing the national anthem at the training ground.

Park, a 20-year-old computer engineering major at Dankook University, joined the military this year. On the parade ground, he appears to be just one of many conscripts. He, however, is one of the few soldiers from multicultural families doing their compulsory military duty.

Park has a Korean father and a Japanese mother. He was born in Kyoto and moved to Korea when he was 5 years old.

If he gave up his Korean citizenship, he could have easily lived with his Japanese citizenship and been exempted from mandatory military service. But Park volunteered to serve at a border unit instead. 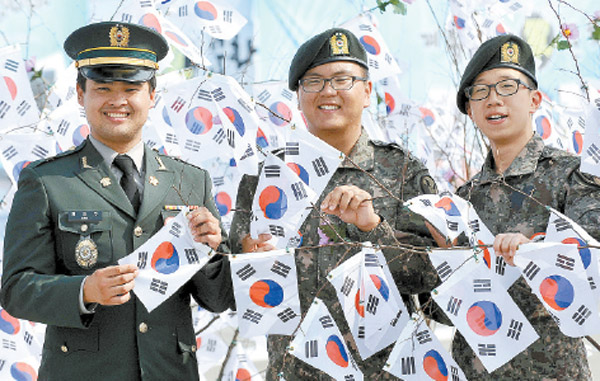 From left: Sgt. Jeong Yeon-gu is half Dominican, Pfc. Oh Ji-su is half Filipino and Cpl. Jeong U-cheol is half Japanese. They say they serve because they are Korean. By Kim Seong-tae

“Some of my fellow soldiers know that my mother is Japanese,” Park said. “But they don’t mention it too much. I feel no discomfort being a child from an international marriage.

“I am a Korean and I feel proud of serving my country,” he said. “I want to be someone useful to my homeland and I want to protect my country.”

According to the Military Manpower Administration, only 52 mixed-blood young men were drafted in 2010 and the number jumped to 156 in 2011.

Of the 927 sons from multiethnic families who joined the military, 557 are currently serving.

Seven of the 557 soldiers were invited to an Armed Forces Day celebration on Wednesday at the Gyeryongdae military headquarters in South Chungcheong. Staff Sergeant Jeong Yeon-gu, 23, attended the event with his mother, Carmen Urena, from the Dominican Republic.

“I think my son is learning many things in the military that I could not teach him,” she said.

“No matter what other people think of me, I always think of myself as a Korean,” Jeong said. “After going through all the experiences that a Korean man must, I feel like I am a true Korean.”

Pfc. Oh Ji-su, 20, said that his mother is from the Philippines.

“And my multiethnic background is the key to my competitiveness,” he said.

“We believe the total number of conscripts from multiethnic families will reach over 1,000 at the end of this year,” a Ministry of National Defense official said. “When we conduct physical examinations, the conscripts are supposed to write down their parents’ nationalities. But it is not a mandatory question, so we believe there may even be more conscripts who have a foreign parent.”

According to the Ministry of Security and Public Administration, the number of sons from international marriages who will turn 19 years old, the eligible age to serve in the military, will grow from 1,719 next year to 3,626 in 2020.

“Around 2002, international marriages soared in Korea,” said Seol Dong-hoon, a professor of sociology at Chonbuk National University. “In 10 years, their sons will be drafted and we will have a skyrocketing number of conscripts from multiethnic families.”

As international marriages became a normal part of life in Korea, the number of mixed-blood children also grew. In 2008, there were 58,007 multiethnic children and the number grew to 204,204 last year.

With the plummeting birth rate, the country will have a shortage of eligible men to be drafted in its conscription system. According to a study by the Korea Institute for Health and Social Affairs, the military will be short of 35,100 soldiers in 2020. By 2030, it will be short 83,700 if it wants to maintain the current level of 650,000 troops.

Analysts said in this situation, children from multiethnic families are valuable to the country’s security. And their perception of national security is also strong.

A team led by Prof. Jeong Byeong-sam of the Korea Army Academy at Yeongcheon conducted a survey of 93 elementary, middle and high school students who have a foreign parent last year on their national security perceptions. The study revealed the soldiers’ perception was above average.

With the increasing number of conscripts from multiethnic families, the military faces the challenge of overcoming biases about them.

“They are soldiers of Korea, so the military must be prepared to embrace them fully and properly,” said Professor Seol.

“By 2025, one out of 50 soldiers will be a conscript from a multiethnic family,” said Jeong Ji-eon, a professor of child education at Masan University. “To prepare for the future, all the soldiers must be educated on the diversity of families, and the culture inside the barracks also needs to be improved.”

She said the commanders should improve their attitudes toward soldiers, too.

“In the military academies of some advanced countries such as the United States and the United Kingdom, cultural anthropology is a prerequisite,” said Kim Kwang-ok, professor emeritus of anthropology at Seoul National University. “We have to take that into account.”

Koh Seon-ju, co-chair of the civic group Healthy Family, said human rights education should be reinforced right at boot camp. “The commanders should change their awareness,” she said.

Other experts also said the religions of the mixed-race conscripts should be treated more delicately. A thesis released by Professor Jeong of the Korea Army Academy in October last year pointed out that conflict may arise when more soldiers with a wide variety of religions join the military. As of now, the military accommodates religious services for Protestants, Buddhists, Catholics and Won Buddhists.

“When the number of conscripts from multiethnic families increase, their religions will be diversified,” Healthy Family’s Koh said. “The current military’s systems cannot accommodate their needs for special diets and religious activities.”

Other experts said soldiers from multiethnic families will also be an important asset to the military because of their cultural diversity.

“They are often more fluent in foreign languages,” said Prof. Hwang Dae-sik of the Korea Air Force Academy. “When Korea makes overseas deployments, their abilities can be utilized. It will help the military’s globalization.”

“Soldiers from multicultural families are also citizens of this country,” said an official from the Ministry of National Defense. “Treating them with equality is the policy of the ministry.”

He said the ministry is working to provide more support for them by promoting understanding about multiethnic families within the military. “We are also creating a culture where the mixed-race children will feel proud of serving in the military,” he said.