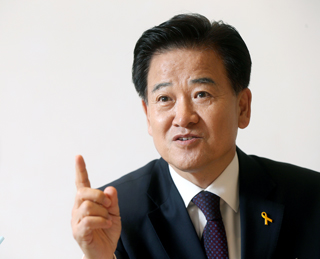 
The resume of Chung Dong-young, senior adviser to the New Politics Alliance for Democracy (NPAD), is impressive.

Chung, 61, was a three-term lawmaker and worked as the unification minister in the Roh Moo-hyun administration, in which he was considered second in command.

He was also the leader of the ruling Uri Party, which collected 152 seats after the 2004 generation election, more than tripling the number it previously held in the National Assembly.

Chung later ran for president in 2007. But his peak in politics ended when he was defeated by Lee Myung-bak that same year, and the dark shadow it left hanging over his political career remains. The lawmaker has scarcely been seen on the political scene since he lost the 2012 general election and decided not to join the presidential race.

But as a veteran politician, Chung has some words to share about the current state of the main opposition party. The former MBC anchor compared the NPAD to a “wrecked ship.” He added that the party has lost its values and that only power struggles remain.

The JoongAng Ilbo interviewed Chung last Thursday, the day Park Young-sun stepped down from her position as floor leader of the NPAD because of the special Sewol law.

Q. Why did you criticize the agreement on the special Sewol law?

A. Let’s go back to the morning of April 16 when the Sewol ferry disaster happened. There was no ruling or opposition party, conservative or liberal, pro-government or antigovernment. Everyone was unified in that people’s lives and safety were important and agreed to create a different Korea. But what’s happening right now? People are fighting about whether the families of the Sewol ferry victims should participate in the selection of a special prosecutor or not. Our society’s problem-solving abilities have shown their limits. The ruling party, the opposition party and the Blue House are all losers.

You called the agreement a “disaster of the opposition party.” Why?

Do you think leadership is the problem? Why do you think the NPAD is collapsing?

The real problem is that the party hasn’t been able to step up since the presidential defeat in 2007. For the last seven years, average economic growth has been 2.9 percent. Net income has reduced and so has the middle class. It’s a precious opportunity for the opposition party to take over the administration again, but the party is collapsing on its own. This is because it doesn’t have clear thoughts about what it is and what it represents. It doesn’t have a clear principle on why it is in politics.

There are two parts to the opposition party’s role. The first is for it to become a loyal opponent that says “no” when the ruling party is doing something wrong. Another is to serve as an alternative.

Our party falls short in both roles. The Saenuri represents those who already have vested power such as the chaebol, conglomerates and the rich. However, there is no force that can represent the 8.5 million part-timers, small business owners and those who have little power to express their voice.

Some people are demanding that the NPAD take on moderate policies. What’s your opinion?

Talks about going moderate, moderate conservative or liberal are in vain. The NPAD should have a discussion about which route it should take and the values it should opt for.

Opposing a plan to increase taxes on cigarettes or residences is easy, but what we need to do is offer an alternative. For instance, just as there was an education tax in the 1970s and a special tax on farming and fishing in the 1980s, imposing a special purpose tax on income tax or corporate tax could be an alternative. If those taxes are used for health care and free child care, the benefits can be spread efficiently.

But the NPAD seems to be focusing on power struggles between factions instead.

As the party’s route and values, which are considered its backbone, are missing, only a power struggle remains, with fights between each faction. People are asking, “What can you do for us and how can you improve our lives?” but as the power struggles are rampant, they become disgusted with the party.

Recently, I felt heavy with worry when a woman from Bomun-dong grabbed my arm and cried about the NPAD’s situation. She said all she had done with her life is work but that the world hasn’t changed in a good enough way and that there’s no one to trust. I had nothing to say to her comments. We really have to give hope to these kind of people.

It has been 19 years since you entered politics. How do you rate your experiences in the field? What do you regret?

My politics have been immature. I was at the forefront of creating a party and have also experienced doing the opposite. I had success and also failure. But through these experiences, my beliefs have become stronger.

The presidential defeat in 2007 is still an event that rings in my memory. After the “Yongsan disaster” [an event that killed five residents and one policeman due to conflict over a governmental relocation plan], I went to a Mass in the village, but the priest pointed to me and told others the disaster would not have happened if I had done a better job. It was a real shock to me. With atonement in mind, I have visited Yongsan District every day since, and I also moved to the National Assembly’s labor committee to find out more about irregular workers and labor issues. What I learned during that time was more than if I had spent a decade in Yeouido in politics. I took the time to reflect on how much I represent people’s tears and pain. I now have faith that the answer for our party’s way of life is there. It’s not about the political route right or left. It’s the route of life.

Have you given up on your dream to become president?

At this moment, what we first need to talk about is having a party that can win the presidential election. Currently, the party’s bowl is broken and the water is leaking. In order to put the power inside, we need to change the bowl or bring a new bowl. If there is a runner inside that new bowl, then we have a shot at running the country. At the moment in this party, I don’t think we could run a government even if there was a candidate.