A state museum dedicated to Hangul, the Korean writing system, opens to the public today.

The National Hangeul Museum, officials say, is the second in the world that deals exclusively with a nation’s alphabet. The first is the National Museum of Chinese Writing in Henan Province, central China.

“There are about 12 museums that are dedicated to languages or printing cultures, but none of them are state or provincial level,” said Hong Yun-pyo, chairman of the committee that worked to open the museum.

Hangul - which is also spelled “Hangeul” because of discrepancies in romanizing Korean - was created in 1443. It is a source of pride for Koreans, who tout the system as scientific, philosophical and easy to learn.

“Series of Auxiliary Participants” by Hong Sun-myung is intended to honor those who contributed to King Sejong’s creation of Hangul, but whose names are not recorded in history books - women and children included.

But critics doubted whether the museum would be able to present quality artifacts, given that so many related to Hangul are already featured in other collections.

Regarding such concerns, Hong, a former Korean language and literature professor at Yonsei University, admitted that the committee members were concerned about finding satisfactory relics, but were pleasantly surprised in the end.

“We found some artifacts that are as good as state treasures, like for instance Hangul typewriters. Some weren’t even recorded in historical documents. Because Hangul was for everyone, the relics could be found from people’s everyday life.”

The museum’s three-story structure, situated next to the National Museum of Korea in Yongsan District, central Seoul, also came under criticism for its location. 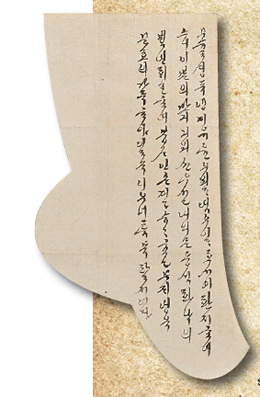 A Hangul letter from 1893 on a sewing pattern for socks.

The area has little connection with Hangul and also isn’t easy to access - particularly for tourists from overseas.

Critics compared the site unfavorably to Sejong Road in Gwanghwamun, which is named after King Sejong (1397-1450), the creator of Hangul.

Nonetheless, the past four years have been an opportunity for the government and academics to study the Korean alphabet and gather materials related to it.

The museum has about 10,000 items in its collection as a result, around 7,500 of which have been donated. In its permanent exhibition, there are about 700 items on display, including a letter written in Hangul in 1793 by King Jeongjo (1752-1800), the Hangul typewriter developed in 1947 by ophthalmologist Gong Byeong-woo (1906-95) and a 19th-century spool engraved with Hangul lettering.

Also notable is a letter from 1893 that was written in Hangul on a sewing pattern used to make socks. The correspondence, penned by a daughter, is addressed to her parents and wishes for their good health. 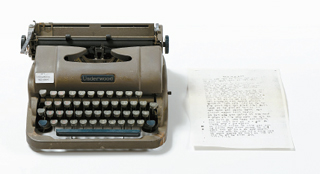 A rare Hangul typewriter developed in 1947.

Between the 17th and 20th centuries, it was a trend to write letters of this type to parents, officials explain, in the hopes that they would wear the socks and live a long, healthy life.

The “Haeryebon” version of Hunminjeongeum, published in 1446 by King Sejong, is also on display, but only for the first week as it is on loan from the Kansong Art Museum.

Hunminjeongeum, which translates as “Correct Sounds to Instruct the People,” is Korea’s first manual on Hangul, and the “Haeryebon” version details how each character from the alphabet is supposed to be pronounced.

Also of interest is the special exhibition “King Sejong the Great Opens the Age of Hangul Culture,” which features contemporary artwork alongside ancient artifacts.

“We wanted to show that Hangul is not just a dead relic from a long time ago but is still ongoing, inspiring many artists,” said Kim Mi-jin, a professor at Hongik Graduate School of Art who curated the exhibition.

Highlights include “Sound Looking/Rain” by Kim Ki-chul, an installation that mimics the sounds of raindrops at Jongmyo, the ancestral shrine in central Seoul, and displays the royal seal of King Sejong.

“Series of Auxiliary Participants” by Hong Sun-myung is a string of portraits of peoples’ backs, aimed at highlighting those who contributed to Sejong’s creation of Hangul but who are not recorded in history books.

The special exhibition runs until March 1.

“There is lots of potential for the National Museum of Hangeul as special exhibitions can also touch on such related fields as literature, design and arts. We have planned exhibitions for the next three to four years,” Hong said.