BOK gets bipartisan earful at audit

BOK gets bipartisan earful at audit 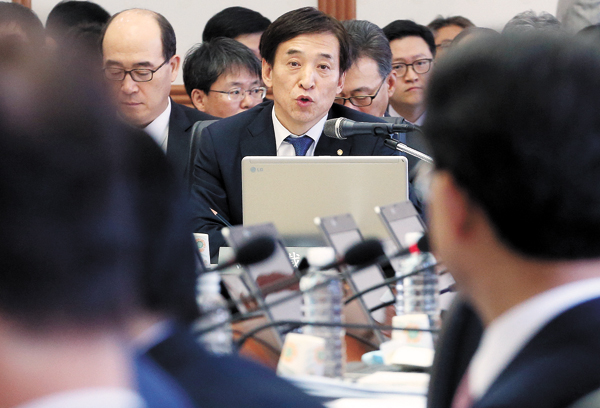 
Ruling and opposition party lawmakers criticized the Bank of Korea for the inaccuracy of the central bank’s forecasts on the economy at the first round of parliamentary audits that began yesterday.

The BOK was the first target of lawmakers of the Strategy and Finance Committee among other economy-related government agencies.

The lawmakers pointed out the central bank’s economic growth forecasts and target inflations rates are too optimistic and lack accuracy, misleading other institutions and the general public.

“Until 2009, BOK data had been considered quite accurate compared to that of other organizations, but the central bank has been reduced to the least accurate institution,” said Lee Hahnkoo of the Saenuri Party at the bank’s headquarters in central Seoul.

The BOK’s forecast for growth in private consumption was 2.8 percent last year, but the figure turned out to be 1.9 percent, said Lee.

As for inflation, the central bank has set target rates that are one percentage point higher than the actual rates for the past three years, lawmakers pointed out.

“There are growing concerns that trust in the central bank is being undermined,” said Yun Ho-jung of the New Politics Alliance for Democracy.

Yun called for measures to improve the quality of consumer price forecasting, citing its effect on decisions regarding the benchmark interest rate.

The BOK has a mid-term inflation stabilization plan for 2013 through 2015, which sets desirable rates between 2.5 percent and 3.5 percent.

However, growth in consumer prices has been less than 2 percent for the past 23 months.

BOK Governor Lee Ju-yeol admitted at a forum last month that the central bank had been incorrectly forecasting growth in prices because it failed to consider structural factors.

At the audit session yesterday, Lee agreed with Rep. Lee Hahn-koo’s suggestion that the bank needs to adjust the mid-term goal if economic conditions change and fail to meet earlier forecasts.

“In the short run, the inflation target rate affects monetary policy in six months,” Gov. Lee Ju-yeol said. “It will not be easy to reset the current goal, because that might trigger a controversy over changing monetary policy, too.”

However, Lee answered “yes” to a Saenuri lawmaker’s question about whether the bank will improve its inflation management system to make it more reliable.

Since the BOK was bashed by lawmakers yesterday, many wonder how the bank’s monetary policy committee review of its growth forecasts for this and next year’s economy might affect decisions on the benchmark interest rate. The committee is scheduled to hold its monthly meeting next week.

The BOK cut the key rate by 0.25 percentage point in August for the first time in 15 months in response to growing pressure from the government’s economic team. Even after the cut, there have been rumors another rate cut will be needed to support the government’s economic stimulus package, known as Choinomics, which is centered on aggressive fiscal measures and easing regulations on financial institutions to encourage consumers to open their wallets.