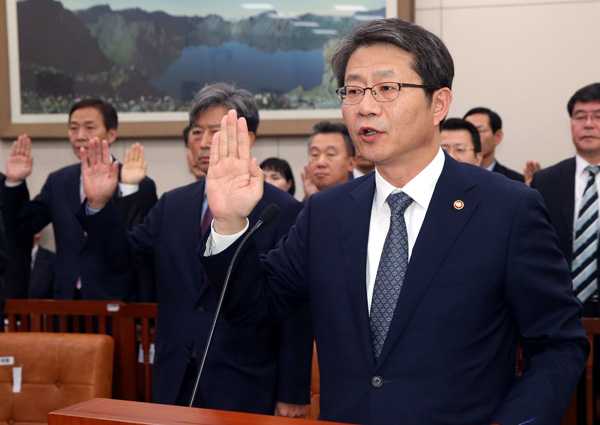 The National Assembly yesterday held an audit of the Ministry of Unification, and lawmakers from both the ruling and opposition parties urged the Park Geun-hye administration to lift the sanctions, imposed by the previous government to punish the North for sinking the Cheonan warship in 2010.

The sanctions, better known as the May 24 measures, bar all exchanges and trade between the two Koreas.

“The May 24 measures are punitive actions for the North’s sinking of the Cheonan so the North must act first [to end them],” said Unification Minister Ryoo Kihl-jae at the hearing.

“But it has been four to five years since the measures were imposed, and the two Koreas must have a discussion to resolve them.”

Despite an international probe’s conclusion that the warship was torpedoed by the North, Pyongyang has insisted on its innocence. The South has demanded the North admit to its action and apologize as conditions to lift the sanctions.

“The government has no intention to maintain the May 24 measures forever,” Ryoo said. “We have to look into why they were imposed, and the two Koreas must work together to prevent another conflict on the Korean Peninsula.”

Admitting that keeping the sanctions could paralyze inter-Korean relations, Ryoo said the two Koreas must have candid talks to persuade the public of the need for change. “Although we have to wait and see, we will do the best to utilize the upcoming opportunity,” he said.

The minister, however, was pessimistic about ending the May 24 measures before the talks. “We want to use the top delegation’s visit as an opportunity and as momentum to improve inter-Korean ties, but we will not reconsider our North Korea policy just for that,” he said. “The government will not change its stance just because some top officials came here.”

At the audit, lawmakers from both the conservative ruling Saenuri Party and the liberal main opposition New Politics Alliance for Democracy urged the ministry to lift the sanctions to improve inter-Korean ties.

While the unification ministry appeared to be ready to talk about lifting the May 24 measures, it showed reluctance toward restarting the Mount Kumgang tour program, citing concerns that Pyongyang could finance its nuclear arms programs with the profit.

“The South Korean people and the international community continue to show concerns about the North’s continuous nuclear development and improved nuclear capability,” the ministry said in a report to the National Assembly’s Foreign Affairs and Unification Committee submitted on Tuesday before yesterday’s audit. “A plan to resume Mount Kumgang tours should be created with a direction to resolving such concerns.”

Seoul suspended the tours to the North’s scenic mountain after a South Korean tourist was fatally shot by a North Korean soldier in July 2008.