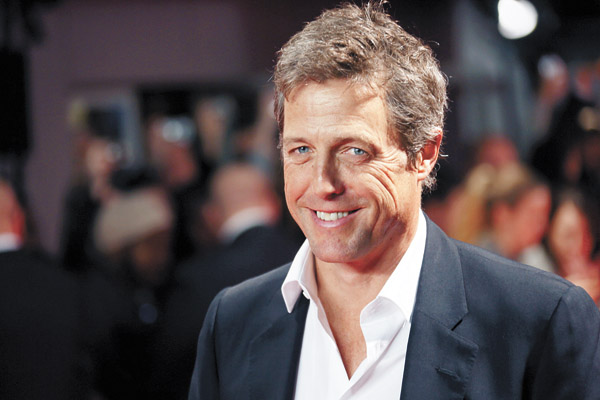 British actor Hugh Grant poses for photographers upon arrival at the Kensington Odeon in west London, for the premiere of the film “The Rewrite,” Tuesday, Oct. 7, 2014. [AP/NEWSIS]

LONDON - Actor Hugh Grant, who became the poster boy for the charming British dandy in romantic comedies such as “Four Weddings and a Funeral” and “Notting Hill,” is delighted not to be part of Hollywood anymore.

Grant channels his feelings in his latest film, “The Rewrite,” as Keith, a washed up screenwriter who moves to a small New York town to give a college course on the sometimes cynical and occasionally realistic perils of Hollywood.

Grant, 54, has also been active since 2011 in the Hacked Off campaign, which is dedicated to raising awareness about the victims of press abuse. He gave evidence at the Leveson Inquiry into the culture and ethics of the British media and accused several British tabloid newspapers of hacking his telephone.

Q. How do you feel about “The Rewrite” marketed as a romantic comedy?

A. I did have that fight with Lionsgate, who are brilliant and marvelous distributors, and in the end they convinced me that the marketplace is so crowded with stuff now that you have to give a simple message to the public. You can’t say, “Oh it’s a little bit of a romantic comedy with other genres mixed in.” It becomes too confusing. So they wore me down, except I did manage to get “romantic” taken off the comedy [for the poster].

How do you empathize with Keith’s views on Hollywood, and how has your perception changed as you’ve gone through it?

This character still actually loves Hollywood and wants to be part of it, and he’s just sad that he’s not and that he can’t get a job. I’m not quite like that in that I’m delighted not to be a part of it anymore, apart from occasional dippings of my toe.

Why do you not want to be part of it?

I never really was crazy to be out there acting, performing, promoting, all that kind of stuff. It’s fun once in a while, but for some people it’s their lifeblood ... I’ve felt that there were other things in life that were equally or more interesting.

How would you cope if you were a new celebrity in today’s world?

I don’t know. I don’t really know how it works anymore except that I can see that, whereas in 1994 you didn’t really have a voice except from some rather grand PR statements through some PR person. People now with giant Twitter followers, millions more than people that read newspapers - at least they have a voice. Reuters