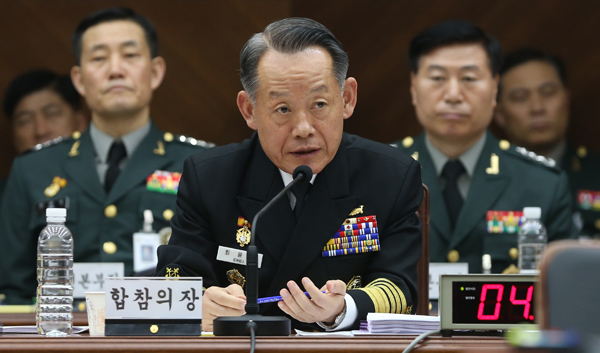 At a parliamentary audit into the Ministry of National Defense yesterday in Seoul, Chairman of the Joint Chiefs of Staff Adm. Choi Yoon-hee, center, explains the situation in which North Korea on Friday fired at balloons containing leaflets critical of the regime that floated over the border. [NEWS1]


The military was grilled yesterday by lawmakers over its countering of North Korean cross-border fire after it was belatedly revealed that machine gun rounds had been fired toward another city with larger populations.

In an audit of the Joint Chiefs of Staff (JCS) yesterday by the National Assembly’s National Defense Committee, Lieutenant General Shin Won-sik admitted that Pyongyang fired anti-aircraft rounds toward Paju, a city about 30 kilometers (18.6 miles) north of Seoul, on Friday, in addition to Yeoncheon, another northern Gyeonggi town.

When asked by New Politics Alliance for Democracy (NPAD) Representative Jin Sung-joon about sounds of gunfire near the Unification Observatory in Paju, Shin admitted that North Korea fired from an inland area on Friday morning toward the border city, which has a population of 417,500.

He added that the North fired from an area about 8 kilometers away from the South’s Unification Observatory, but the military did not return fire because the bullets did not appear to have crossed the border.

Earlier in the day on Friday, civic groups launched 10 helium-filled balloons carrying 200,000 leaflets critical of the North Korean regime from the parking lot of the Unification Observatory.

Separately that day, the North fired anti-aircraft rounds at balloons that had been launched from Yeoncheon County, northern Gyeonggi, near the demilitarized zone, that also contained material critical of Pyongyang. Some shots landed near military units and public service centers in Yeoncheon. The South’s military returned about 40 rounds using K-6 machine guns.

When the military authorities gave a press briefing Friday afternoon about the gunfire exchange in Yeoncheon, it did not disclose information about the incident in Paju.

At the audit, it was also revealed that the military’s artillery hunting radars, Arthur-Ks, took one hour and 23 minutes to locate the origin of the North’s machine-gun fire toward Yeoncheon.

According to a report to lawmakers by Adm. Choi Yoon-hee, the chairman of the Joint Chiefs of Staff, sounds of gunfire were heard coming from North Korea around 3:55 p.m. on Friday, though the radars failed to immediately locate the source. Choi then said the military managed to confirm the location of the origin starting from 5:18 p.m.

He added that the geographical features of the border area make it difficult for the military to accurately locate the origin of the fire and the landing locations of the shots, dismissing criticism that the military failed to respond promptly to the North’s provocations.

He said the field commanders were making decisions to strongly retaliate without escalating the situation and asked the public to understand their situation.

Following last week’s gunfire exchanges at the border, the main opposition party urged the government yesterday to stop the civic groups’ attempts to fly their materials. “The Park Geun-hye administration must stop these civic groups from sending more leaflets, even if it requires the government to mobilize the military,” interim NPAD Chairman Moon Hee-sang said.

He added that the people’s safety and lives were threatened by the government’s irresponsible and indifferent attitude toward the civic groups, but at the same time criticized those organizations for escalating tensions between the two Koreas.

The Ministry of Unification said yesterday that it is up to the civic groups to make their own decisions on whether to send more leaflets.

“There are no legal grounds for the government to forcibly restrict their actions, but the government has conveyed its concerns to those groups by urging them to act prudently and wisely,” said ministry spokesman Lim Byeong-cheol.

“It is the government’s duty to protect freedom of expression, guaranteed by the Constitution, while making efforts to protect the public’s safety and property from the North’s threat,” he said.

However, Lim added that the government could take an action if necessary, citing that the police had been dispatched in the past to prevent civic groups from entering border areas.