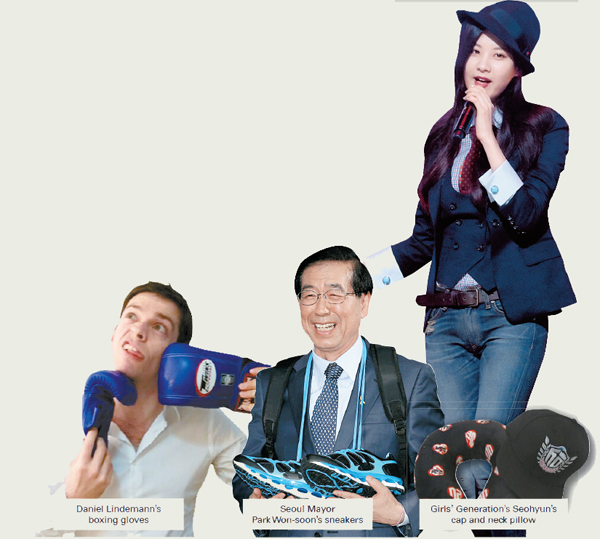 The JoongAng Media Network’s 10th annual WeAJa flea market returns this year on Sunday. The event, which has previously drawn participation from more than three million people, will be held in Seoul, Daejeon and Busan, where attendees can trade goods, bid for items donated by celebrities and enjoy entertainment on the sidelines.

The country’s biggest flea market has raised over 1.1 billion won ($1.03 million) in previous years, with the proceeds going toward helping underprivileged children.

This year’s market, under the theme, “Warming Earth: Cool it with sharing,” is expected to be the largest ever, following a steady increase in participation from domestic enterprises, local authorities, civic and other organizations. This year’s flea market will also see more celebrity items up for auction.

The panelists on the JTBC talk show “Non-Summit,” in which three Korean hosts and 11 foreign residents from different countries discuss topics of concern in fluent Korean, put up a range of items.

The program’s native German, Daniel Lindemann, who also writes for the JoongAng Ilbo, donated a pair of boxing gloves and three shirts.

“I didn’t even use them much because I really like the color and the design of the gloves,” said Lindemann. “But since it is a goodwill event, all the members of ‘Non-Summit’ gladly took part.”

Samuel Okyere, from Ghana, donated the T-shirt he wore when he appeared on the entertainment program “Running Man” with his name tag on the back, autographs and a wallet with the number 572 - which sounds similar to his surname when pronounced in Korean - engraved on it.

Other panelists on the program also donated various items, including a bottle of Italian wine, a baseball glove, bags and a mirror.

Other entertainers also participated, giving away hardly used items. Girls’ Generation’s Seohyun donated her cap and a neck pillow - must-have items for an idol on the go. Her donations are expected to be very popular.

And Tiny-G’s Dohee, who rose to prominence in the drama “Reply 1994,” donated four pairs of sneakers along with a copy of the group’s album signed by the band.

Dohee said she cherished those shoes because she often used to wear them while preparing for her debut as a singer and when she appeared in the drama.

Other entertainers, as well as politicians and government officials, also donated their time and possessions.

Park Han-chul, president of the Constitutional Court, donated a framed painting of four horses that was previously hung in his office. He said he received the work as a gift 16 years ago, wishing him luck in defending justice.

Seoul Mayor Park Won-soon gave away the pair of blue sneakers he wore during the mayoral race in the June 4 local elections that one of his supporters bestowed upon him. The man said he was impressed that Park walked around wearing a backpack.

Vice Speaker of National Assembly Lee Seok-hyun donated a framed sculpture of praying hands with his autograph on the back. The artwork previously sat in his study.

“When I was stressed, I would calm myself by looking at it,” he said.

Donations have also poured in from organizations and civic groups.

“They are filled with buckwheat, which is good for those who have a lot of body heat, and it also clears the head,” Cha explained. “I take them whenever I travel abroad, and I often give them as gifts.”

WeAJa is an abbreviation of the three major players in the event: We Start, a campaign designed to give educational assistance to children under the age of 12 from low-income families; Areumdaun Gage, or Beautiful Store, a non-profit corporation that supports marginalized people and activities that the serve public interest; and Jawonbongsa, or volunteer efforts by the JoongAng Media Network.

The flea market, co-hosted by the Seoul, Daejeon and Busan governments, will also play host to diverse cultural events and family-friendly activities.

More information, which is also available in English, can be found at weaja.joins.com.