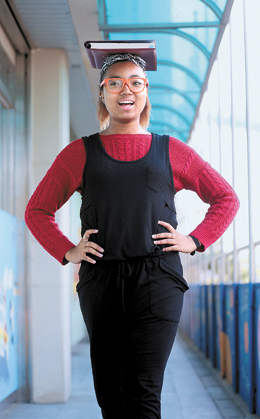 On Sept. 30, she sat behind the counter consulting a customer who had lost her PIN number for mobile banking.

At first glance, Park doesn’t seem any different than the average Korean, neither in her appearance nor her speaking abilities.

However, Park was raised in a multi-cultural family: Her grandmother and mother are Vietnamese and her grandfather is Korean. After living in Ho Chi Minh City, Vietnam, for 13 years, she flew to Korea, where she has resided for a little less than 10 years.

When she first came here, she didn’t speak any Korean, but her desperate efforts to become fluent led her to where she is now. She was hired by Woori Bank through an open recruitment for those who have obtained high school diplomas or the equivalent.

The rate of competition was 10 people for every one vacancy.

“She is always confident and smiley,” Park’s branch manager said in praise. “Her performance has been great.”

Multicultural families in Korea and their children were long subject to social stigma and discrimination, cast under the shadows of Korean society, which for a long time refused to accept or acknowledge ethnic diversity in its ranks.

But as the second and third generations from these families have become more visible and more vocal, attitudes and social conventions have slowly begun to shift, particularly within the younger demographics.

For some of them, it is a sign of positive things to come. And for others, finding their way in such a homogenous, tight-knit society has propelled them forward and even influenced their dreams.

Hwang Do-dam, 15, is among them. Raised in a multicultural family, she dreams of becoming a model. Since her Ghanaian mother and Korean father passed away, she has stayed at a group home founded by Korean pastor Kim Hae-seong for children of mixed heritage who have nowhere else to stay.

Hwang attends the School of Global Sarang (GIS), a multicultural school that opened in March 2012 to help immigrants better adapt to Korean society.

To realize her dream, the 15-year-old said she always keeps fashion magazines and videos by her side to study how models traverse the catwalk.

“I actually enjoy how people look at me because modeling is a job that always gets people’s attention,” she said.

Her short-term goal is to apply to the Hanlim Multi Art School’s fashion department in November.

Ultimately, she ultimately wants to walk the stage in the Victoria’s Secret Fashion Show, an annual event held in New York City by the largest U.S. lingerie retailer.

“I’ll do my best to become a successful model,” she said, “so I can bring hope to second-generation [youth] in multicultural families.”

Jeon Mi-na, another student from the GIS, moved here two years ago without knowing any Korean. Her mother is Filipina and her father is Korean.

“My Korean has become way more fluent compared to two years ago, but I am not yet satisfied,” she said.

“To become an interpreter, I need to study more difficult words.”

But in some cases, the dreams of the second generation aren’t just confined to Korea.

Some aspire to live and work abroad.

Choi Jong-in, 18, said he applied for Korean Augmentation to the United States Army (Katusa), in which qualified Korean conscripts with high English abilities can be assigned to a U.S. Army garrison if they are selected via a random lottery.

After finishing his military service, Choi said he plans to fly to the Philippines and become a lawyer.

“Compared to Korea, the laws and social systems in the Philippines are not concrete,” he said. “I would like to contribute to the Korean diaspora in the Philippines to help Koreans who are facing unreasonable circumstances there.”

Those with mixed heritage have also begun to stand out in culture and the arts.

Ji Dae-han, who appeared in the film “My Little Hero,” won the Best New Actor award at the 2013 Baeksang Arts Awards.

Han Dong-ju, whose mother is from the Philippines, also appeared on stage in 2010 as a ballet dancer at the Seoul Ballet Theatre’s 15th anniversary of its founding performance.