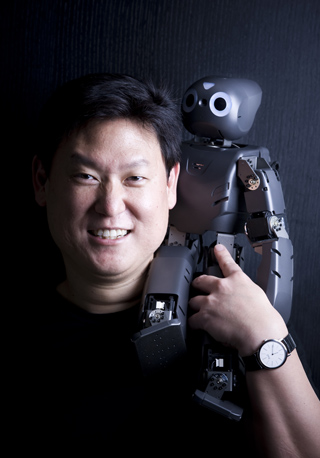 Dennis Hong holds Darwin-OP on his shoulder. The UCLA professor and robotics engineer created the humanoid to use in research. By Kwon Hyuk-joo


Samsung Electronics’ third-quarter performance was shocking. Because of the waning popularity of its smartphones, the tech giant’s operating profit was cut in half and it is still uncertain when the tide will turn.

In Samsung’s situation, innovation is essential, and Dennis Hong, a renowned robotics engineer, has advice for the company.

In an interview with the JoongAng Ilbo, Hong, a professor at UCLA and the founding director of the university’s Robotics and Mechanisms Laboratory at the Mechanical and Aerospace Engineering Department, said Samsung should not worry about failure despite its poor performance.

The 43-year-old added that innovation can’t be achieved by walking on a wide, flat road but must be reached by walking close to the edge of a cliff.

“Innovation is something where you run together with competitors, but suddenly leap forward ahead of them,” Hong said. “If Samsung is afraid of getting hurt by jumping, it can’t progress, but if it can leap forward with courage and faith, that’s innovation.”

Hong, who was chosen as one of the world’s 10 brilliant young scientists by Popular Science magazine, is famous for developing Charli (Cognitive Humanoid Autonomous Robot with Learning Intelligence), which is considered to be the United States’ first humanoid robot. He also made the world’s first car equipped with technology that allows a blind person to drive independently. And his team has won the RoboCup, the international robot soccer competition, each year since 2011.

He is also a popular mentor for young engineering students, lecturing through programs like TED.

When Hong visited Korea last month, he asked to visit Samsung’s young employees. The professor said he thought that Samsung’s role in Korea’s corporate culture and its innovations are important. When one employee asked him for a video message, Hong was quick to reference the executives.

“If you want to live in risks, make an atmosphere that allows failure,” he said. “If you emphasize fostering talents and R&D, it doesn’t matter. A corporate culture that can embrace failure is important.”

He pointed out that a company that is afraid of failure is only capable of copying other companies’ work. Even if companies encounter difficulties, a corporate culture that encourages innovation is what makes a truly great company, Hong claimed.

Hong lamented that Samsung’s robot projects have been unsuccessful. In 2012, the company developed the Roboray humanoid robot, but it failed to draw much attention. Last year, it developed a surgical robot, but it wasn’t widely used due to concerns over medical accidents.

“Although I didn’t participate in the project, the academic world cheered Samsung’s robot as one of the best,” Hong said. “But I have vivid memories of the disappointment of fellow robot scientists who participated in Samsung’s project.”

Hong said that after Bill Gates wrote a column predicting there would be one robot per household, companies like Google, Microsoft, Apple and Amazon joined the industry. But none of them have developed a robot for use in people’s daily lives since the robot vacuum cleaner.

“For a company that needs to make a profit, it’s really difficult to find a robot that is useful to people while still being price competitive and guaranteeing safety,” Hong said.

However, the professor claimed that robots designed to save lives can be pushed for development regardless of price. In fact, he said he is focusing on making robots for evacuations during a disaster or a fire extinguishing robot that can be used in tragedies like the Fukushima nuclear accident or Sewol ferry sinking.

His team was one of six to advance to the DRC finals in June to compete for the prize of $2 million.

Hong is also an honorary ambassador to the 2014 Korea Assistive Technology Device Fair, which starts Oct. 27 at the aT Center in Seoul.

“There are lots of areas in which robot technology and IT can be grafted with assistive devices for the disabled,” he said. “What’s more important is that technology for the disabled can actually speed up the development of robots committed to the daily life of normal people as well. This is a field that Korean companies looking to the future can actively challenge.”