Abenomics guru tells off the BOK

Abenomics guru tells off the BOK 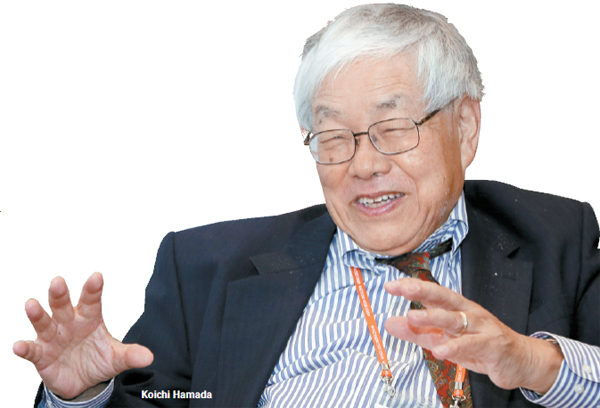 Koichi Hamada, the Yale University economics professor who gained fame as the inventor of Abenomics for Japanese Prime Minister Shinzo Abe, said the Korean central bank has been behind the ball in its monetary policy moves.

“It is a pity for the Korean people that even though there was a good example just next door, Korea didn’t react this time,” said Hamada in an interview with the Korea JoongAng Daily at the Shilla Hotel yesterday.

The 78-year-old professor highlighted the importance of monetary policy in reviving the economy and said the Bank of Korea better cut the key interest rate one more time in the near future.

“I hope that Korea will learn from Japan’s experience,” he said.

“The BOK can do its own quantitative easing and cut the rate one more time,” he continued. “It is a nontraditional monetary policy that some BOK people don’t want to pursue, but still there are positive benefits. It is a good time for BOK people to understand the mechanism of the currency market.

“The Korean currency appreciates because the country’s interest rate is higher than that of Japan.”

The professor pointed out that in recent years, the Korean central bank hasn’t engaged much in monetary policy.

Regarding Koreans’ criticism of the Japanese government for the use of quantitative easing to artificially weaken the yen, Hamada pointed out that Korea pursued a similar monetary policy in 2009 through 2010 to make its currency depreciate against the Japanese yen.

“After the collapse of Lehman Brothers in 2008, the Korean government actively engaged in monetary policy, and as a result, that helped many Korean electronics companies such as Samsung beat Japanese rivals like Panasonic,” Hamada said.

Hamada is an expert in game theory and believes countries are in a grand game of monetary policy. He is known for applying game theory to international economics. Considering that background, many Korean scholars say that Hamada would have known what the impact of Abenomics would be on other economies, including Korea’s.

“International monetary policy is also a game,” he said. “Not knowing other parties’ strategies is a disadvantage.”

Hamada explained that in the case of Abenomics, monetary policy was the most important component.

“We thought that the recession of the Japanese economy was blocked by the supply side,” the professor said. “There was not enough supply, so monetary policy was the most important part of Abenomics.”

The professor insisted that Abenomics is going in the right direction, and will save the Japanese economy from decades of floundering.

“Abenomics is running in the right direction,” Hamada said. “The monetary expansion and supporting fiscal expenditures did work during the first one and three-quarter years.”

The first and second “arrows” of Abenomics were demand-side policies, while the third is structural reforms, which will create more political resistance, he explained.

Thanks to the first and second arrows, Hamada said Japanese demand is on the rise. With the third arrow, Japan will start boosting the supply side.

However, Hamada displayed a little bit of concern about the upcoming tax increase in Japan.