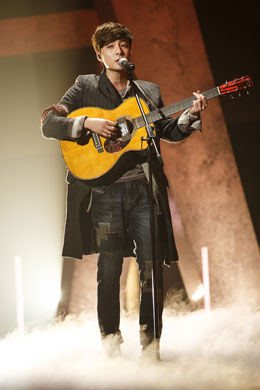 Roy Kim has not avoided the criticism that applies to singers who appear on TV survival audition programs.

The performer entered the local music scene after winning “Superstar K4,” and although he ranked No. 1 on several music charts with his first single “Spring Spring Spring,” his debut was marred by allegations that he plagiarized the song.

The controversial talk eventually died down, but it left Kim’s music career somewhat scarred ahead of leaving Korea to study at Georgetown University.

But although Kim’s departure was planned before the controversy arose, college really gave him some time to heal.

Although the singer’s new track “Home,” the titular song from his second album that was released earlier this month, did not draw a heated response from fans compared to his previous hits, many critics said it showed Kim has developed musically and that it could give him a new stepping-stone to gain more momentum in the music scene.

Q. What did you want to say with this album?

A. While the first album was more about young people’s sentiments and excitement over first love, the second album doesn’t just tell people to “be happy and love.” I focused more on lines of thoughts from people who would actually listen to my music. I felt like I needed to make music that can speak to people’s pain. I wanted to show fans I have become more mature.

Do you think the critical evaluation of your first album pushed you to change your music style?

I don’t want to say I was in pain because of the last album. Whether it is a good or a bad thing, it made me think a lot about why certain things happen and what they mean. I never got a chance to really do that in Korea, but I thought about things more in the United States in the past year while studying.

How was your time in the United States?

I studied hard. I was inspired to work hard when I [saw] other senior students studying hard and looking for jobs. In the first semester I did OK, but in the second I did much better.

How was your life at Georgetown?

I just hung out with friends. We ate together, played soccer together, and I sung and played guitar to them. Most of the songs I have on the second album came from those times. My friends are somewhat surprised that the songs I sung to them are now included in an album.

You’re already a professional singer and have also gained fame. Do you think getting an education is necessary?

I don’t have to finish school, but at the same time I also don’t think it’s better for me [not to go to school]. There are many things you learn in college and being a singer doesn’t mean you’ll be singing and playing the guitar every day. I think I can develop my music further when I study, because I need something other than musical education.

How do you feel about going on to entertainment shows?

I only want to make music and perform. But it’s been hard recently for singers to get results by just making music in the industry. Music comes as a priority to me, but I do think [already] being a bit of a celebrity to gain success as a singer is good.