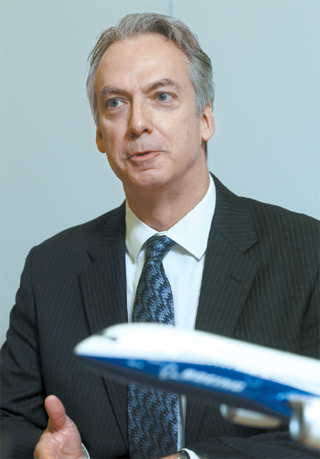 Before joining the world’s largest aircraft manufacturer in May, the 54-year-old had been a member of the U.S. Senior Foreign Service since 1983. His previous posts include senior adviser for security negotiations and agreements in the State Department’s Bureau of Political-Military Affairs and U.S. ambassador to Thailand.

The native of Indiana served three tours as a diplomat in Korea, most recently as the minister counselor for political affairs at the U.S. Embassy in Seoul.

Furthermore, John is married to a Korean woman, who he claims is one of the main reasons he came back to Korea.

“It’s really true to say that Korea is a second home,” said John during an interview with the Korea JoongAng Daily on Tuesday in Seoul. “I spent almost 10 years of my life here.”

Throughout the interview, John, who is a graduate of Georgetown University, frequently used such words as partnership, friendship and relationship to make his point that diplomatic and business activities are not that different.

John emphasized that Boeing is committed to Korea, and he has been busy demonstrating that commitment. The day after the interview, John went to Yeongcheon, North Gyeongsang, to discuss the expansion of the Boeing Avionics Maintenance, Repair and Overhaul Facility that is currently under construction.

Q. Do you find differences between diplomats and businesspeople?

A. I guess there are more similarities than I thought there would be. When I was working for the government, I had to build an alliance and partnership between the United States and Korea. You had to do that by reaching out to the government, the public, businesses, NGOs … all sorts of people. I find that with Boeing, I am doing the same thing, because I’m looking into the products that are a key part of building the relationship and alliance. What we sell is at the heart of building both a defense and a commercial alliance.

Why did you decide to begin your new career with Boeing?

Boeing is a different type of company and how it works here really is essential to the relationship between the United States and Korea. So I’m proud of working for the company in that way. They also have a good sense of ethics that I like in terms of how they operate worldwide. They are very ethical in doing business, where you are comfortable. I’ve seen how Boeing does business when I was at the embassy. The company wants to be part of the community. I’ve seen other companies that just come in for selling certain products and leave, but Boeing comes in and stays and works and commits to the relationship.


You previously served as the foreign policy adviser to the chief of staff of the Air Force. Did that position help you get this job?

I had no idea when I once worked for the Air Force’s foreign policy adviser that I would later actually be involved in the aerospace industry. So it was a very fortunate coincidence to have that background. But I learned a lot about aircraft, and more importantly, about the U.S. Air Force. I knew we had a very global presence with the Air Force, but I didn’t quite know the extent of the partnerships that we foster in the Air Force in terms of how does Air Force support and help grow other Air Forces. In Korea, we have a very mature relationship. We have been training with Koreans for so many decades.

What do you think about Korea’s business environment?

Nobody’s business environment is ever perfect, there’s always some struggle. But when I look through my 30-year association with Korea since I first came in 1984, it always gets better. If you are looking at infrastructure, Internet, roads and quality of life, the environment gets better and better. If you look at the regulation side, that’s also getting better. There is a long list of business environment-related regulations that have improved, and there are regulations where everyone would like to see improvement as well. I’m sure it’s something the Blue House, or the business community, is working on. But in general, the business environment is good and getting better.

Can you talk about the focus of Boeing Korea’s business?

In Korea, you look at the long-term strategy of where Boeing wants to be in 10 or 15 years. If you look at where Boeing wants to be, we need to be increasingly localized. When we talk with a lot of Korean partners here, they say a “Koreanized,” localized company. The aerospace industry in Korea is certainly going to grow and you need stronger partners here. If you look at Korea’s strengths - manufacturing, design … these point to the need to build strong partnerships between Boeing and Korean companies. So in the next 10 years, it’s not going to be an exercise of simple buying or selling. It’s going to be about a deeper relationship between two sides. And if you look at what Korea is strong at, it’s creativity. Whether it’s President Park’s creative economy or just the idea of launching entrepreneurship and the development of economic sectors, creativity is what Boeing is built on. Korea is not resource-rich, but it’s an idea-rich country. So both are based on ideas, and what we are going to do next is combine those strengths and make each other better.

What do you see as the short-term challenge for Boeing Korea?

We are always engaged in a lot of commercial sales with our partners here. On the defense side, we are in the midst of a campaign in which we are trying to sell refueling tankers to the Korean government. So that’s a short-term challenge. I think going forward in the next two or three years, it’s going to be about finding new technical partnerships here. We work with 45 to 50 Korean companies and that’s why we spent about $400 million here. Our goal is to build partnerships in Korea and start to expand those partnerships by working globally. I can’t talk about special projects right now, but they are groundbreaking and exciting. One of the projects that we recently announced is the Boeing and Samsung partnership, and that’s also really cool stuff. If you look at the partnerships we are doing with Korea, you can always catch the imagination of the world.

What do you think about Korea’s corporate culture, which often entails group dining and drinking?

Fortunately, it seems like that drinking culture is calming down a little bit. But I guess the good part of the drinking culture is that it stems from a desire to work closely with your colleagues and bonding. What really makes partnerships so deep here is that Koreans really commit to friendship, certainly more than anywhere else I have been. It’s vital to have a good network of friends here in Korea. You don’t find many Koreans living in isolation. It’s a place built on relationships and friendships. That’s what makes living here so nice. It really is a background for my vision for Boeing, too, because I want our company to be part of a network of long-lasting friendships here.