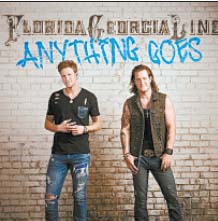 Busting out with a record-breaking country single, as Florida Georgia Line did with its multi-platinum smash, “Cruise,” doesn’t always ensure long-term success. But “Anything Goes,” the duo’s second album, suggests they have enough talent and ideas to get past the backlash that comes with overexposure.

Tyler Hubbard and Brian Kelley keep the mood fun, with producer Joey Moi bringing plenty of fresh sonic surprises amid the beats and harmonies. For example, “Sun Daze” could be undermined by the silly pun of its title, on a song about spending a Sunday soaking in rays and indulging in at least two brand-name liquors. But Moi’s arrangement brings in whistling, hand claps and a banjo to create a bright groove that insists on making hips sway.

Florida Georgia Line’s recent hit “Dirt” proved the band can deal with subjects beyond throwing down with friends. But they rarely bother on the rest of “Anything Goes.” And that’s OK, as long as Florida Georgia Line remains this consistently inventive and engaging.