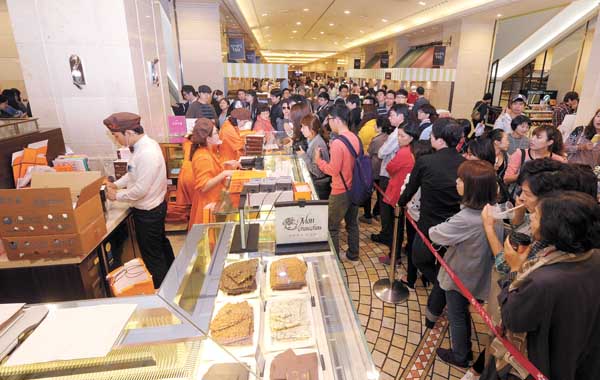 Looking over carefully decorated cakes and rolls in the window, 35-year-old Kim Mi-sun walks around and admires the sweets at Mon Chou Chou, an upscale Japanese bakery in Shinsegae Department Store.

She finally chose the store’s signature Dojima Roll that uses fresh cream from Hokkaido. The roll cake costs 18,000 won ($16), twice as much as ordinary rolls.

“It’s not that expensive if you think that it’s for treating yourself,” she says.

Kim is one of a legion of consumers who occasionally splurges on premium small things - sweets, accessories, key chains, candles and perfume. Consisting largely of women in their 20s and 30s, the customers seek pleasure and satisfaction by spending a little extra on little things for themselves. 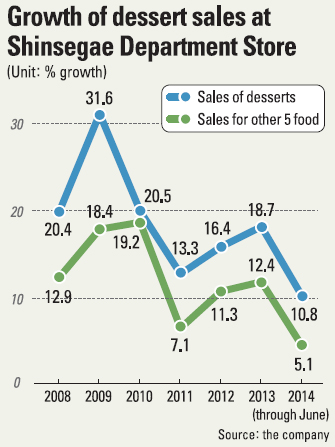 In front of Mon Chou Chou is a long line of customers, and some of them leave without Dojima Rolls because they are sold out.

The bakery recently doubled its daily roll order from 500 to 1,000.

Dessert sales surpassed those of other foods by 5.1 percent last year for the first time at Shinsegae in Banpo-dong, southern Seoul.

Because of the popularity of upscale treats, the department store refurbished its dessert and grocery section in July and added new dessert brands.

Among them are Veniero’s, a New York-based Italian bakery and cheesecake company; Hotel Douce, which offers traditional French sweets; and La Montee, which uses French ingredients and natural yeast.

Many of stores are positioning their sweet treats as luxury items, saying their desserts are not sugary junk food, but made with high-quality ingredients. The treats usually can be made to order with a variety of options for bases and jams.

While sweets can tempt demanding palates, fragrances can be gentle on the nose and set a mood.

The popularity of products such as scented candles and diffusers has taken off at Lotte Department Store.

The number of stores selling those products increased by 50 percent this year compared to a year ago, and sales growth over the past three months was 154.4 percent compared to the same period last year.

“They [candles and diffusers] will not cost you millions of won like luxury cars or designer bags,” says Kim Woo-chan, a senior merchandiser at Lotte Department Store. “Still, consumers can feel they are getting excellent products. Now, famous designer brands also are looking to launch small items of their own.”

Creed, Diptyque and other premium perfume brands have been particularly well-received with sales growth of more than 30 percent this year.

“At Santa Maria Novella, an Italian cosmetics brand, the sales growth of its perfume lines is almost double that of basic creams,” says Kim Kyung-in, a cosmetics buyer at Hyundai Department Store. “The most popular perfume brand is Bond No. 9, a New York-based perfume house. The price point is fairly high in the neighborhood of 300,000 won, but it’s amazingly popular.”

Most people would never think of umbrellas as luxury goods, but Fulton Umbrellas can cost more than 100,000 won. The U.K. company’s products became famous after Queen Elizabeth was photographed using one.

At Shinsegae, daily sales of Fulton Umbrellas soared to 3 million won during the peak of rainy season in August.

Men also claim their right to dabble in premium goods, such as socks and handkerchiefs.

Even though socks designed by Sweden’s Happy Socks cost 60,000 won per pair, they frequently sell out.

“It’s pretty obvious that those socks are much more expensive than typical ones,” says Park Je-wook, a men’s wear buyer at Shinsegae, “But it can also be seen as an affordable way to show off your fashion sense when compared to designer suits and bags. Older men in their 40s and 50s have begun looking for more fashionable socks.”

Nonetheless, the main consumer base for those premium items consists of 30-somethings who earn a fair amount of money. Retailers say the younger generation is more conscious of happiness and quality of life than baby boomers.

“Those who were born in the 1980s are interested in something entertaining and refreshing,” says Son Young-sik, a manager at Shinsegae. “They enjoy traveling and are more open to new ideas. That’s a big difference from men in their 40s and 50s, who tend to pursue success or be interested in political and social issues rather than seeking out something to make them happy.”

Son added that singles or couples without children are more likely to spend money on those items because they have higher disposable incomes.

In a single household, 32.9 percent of the income is disposable compared to 17.2 percent for three- to four-person households, according to the Korea Chamber of Commerce.

When the Shinsegae store in Hoehyeon-dong revamped its food outlets with luxury dessert shops at the end of August, overall sales rose 10 percent.

“Those who are interested in better sweets are more likely to be attracted by better fashion accessories or premium perfumes,” says Son, “and they usually have very distinctive, rather demanding taste and act as market trendsetters. So, if we can serve them well, it will be more likely that certain trends spread out to the wider consumer base.”