Chasing Chinese at sea is perilous

Chasing Chinese at sea is perilous 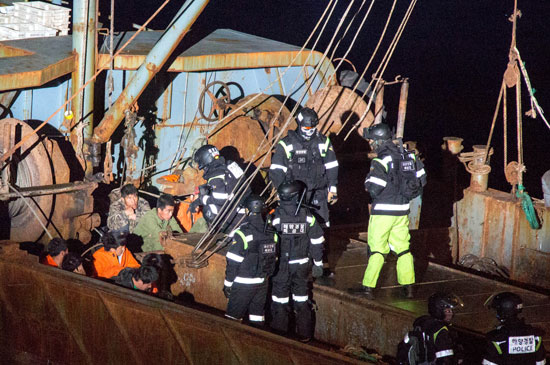 The Coast Guard raids a Chinese vessel found fishing illegally on Thursday in a maritime economic zone exclusive to Korea in the West Sea. Four Chinese vessels were seized during a special crackdown, which began the day before. By Oh Jong-chan


Park Se-cheol fears dying at sea, but drowning isn’t what terrifies him. As a 32-year-old Coast Guard officer, he’s a strong swimmer.

What haunts him are Chinese fishermen.

“They’re really resistant these days,” he said, referring to the hundreds - and possibly thousands - of Chinese fishermen illegally fishing in the Korean West Sea every year. Government statistics show that 1,586 Chinese vessels were busted from 2011 to last July.

Park’s job is to take part in those busts: to raid the vessels illegally fishing in Korean waters, confiscate the ships, cargos and crews, and bring formal charges against them.

But that job is a lot riskier than it was in the past. Today, Park says, it’s “life-threatening.”

“There’s a lot of them brandishing knives and beer bottles,” he said. “Constantly, I ask myself: ‘Am I going to die today?’”

A reporter from the JoongAng Ilbo followed Park on Thursday in what he calls a “life-risking” tour.

Soon after the reporter boarded a 3,000-ton ship with Park at around 2:40 a.m. in waters 120 kilometers (75 miles) west of Gunsan, North Jeolla, a voice pierced the darkness: “Chinese fishing boat within visual distance!”

Tension filled the air. A battle had begun.

Four Coast Guard ships, including Park’s, navigated toward about 40 illegal Chinese vessels clustered together. The tide was high and the wind strong. The chase continued for 30 minutes.

In the end only two boats were caught, with 3,000 kilograms (6,613 pounds) of anchovies and 2,500 kilograms of fish between them. The raids were accomplished without a violent reaction from the interlopers.

That’s not always the case.

On Oct. 10, a Chinese skipper, aged 45, was fatally shot during a raid in waters 144 kilometers west of Wangdeung Island, Buan County. All 19 Chinese fishermen from the ship are currently detained by the Mokpo Coast Guard, with six charged with physical assault as of Friday.

In 2011, a Korean Coast Guard officer was stabbed to death by a Chinese fisherman resisting arrest.

Illegal fishing has been a problem between Korea and China for a long time, but it rarely leads to diplomatic feuds.

In the case of the captain killed this month, Beijing said it was “appalled” that one of its nationals lost his life due to “Korea’s violent enforcement of law,” and urged a “thorough investigation” of the matter.

A Thursday report by the JoongAng Ilbo shed light on how the Chinese vessels are disposed of.

The fishermen are charged a maximum of 200 million won ($188,094) to retrieve their vessels, but not many bother to pay the full amount. Of the 122 Chinese vessels seized by the Coast Guard this year, 96 were reclaimed after the owners paid a small amount. The captains of 19 ships vowed through a written contract that they would “pay off the balance by working in a labor house.”

The Coast Guard puts abandoned vessels up for public auction, but most don’t get sold because they’re made of shabby materials, said Jeong Myeong-gap, an officer at the Incheon Coast Guard.

“We can’t store them forever,” Jeong said. “Maintenance costs are another issue. So we discard them.”

Before disposal, some vessels are managed by a private company, but maintenance costs, which can be 50,000 to 80,000 won per day per vessel, are paid by the government. On average, they are kept for two months, Jeong said.

“At least we can get scrap metal from an iron vessel. But with wooden boats, there’s really nothing to salvage,” he added.