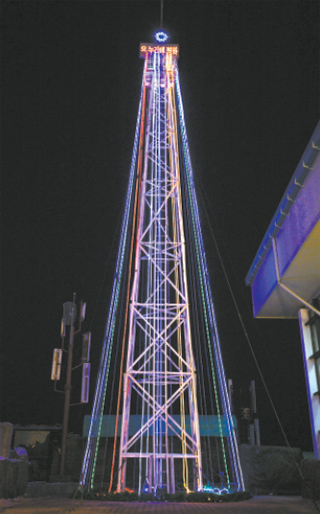 The tower formerly used for a Christmas display on Aegibong Peak in Gimpo, northern Gyeonggi, has been removed, the military said. [NEWSIS]


A tower strung with lights that was used to illuminate the demilitarized zone (DMZ) for decades during the Christmas season has been removed, the military said yesterday.

The tower used for the holiday display, located on Aegibong Peak in Gimpo, northern Gyeonggi, is an 18-meter-high steel (59-feet-high) structure that was built in 1971. The peak is 165 meters high and located just 3 kilometers (1.8 miles) from North Korea.

When lit, the lights are visible even from Kaesong, and North Korea has consistently demanded that the South remove the tower, which it calls an object of “propaganda.”

The Ministry of National Defense said yesterday that the tower had been removed last week for safety reasons.

“In our safety evaluation of large installations in November last year, the tower received the lowest score,” a ministry official said. “We decided to remove it because it could collapse from strong winds.”

After the two Koreas’ militaries agreed to cease propaganda activities near the inter-Korean border in June 2004, the South stopped lighting the tower.

The lights, however, were turned back on in December 2010, after two deadly provocations by North Korea - the sinking of the South Koreans Cheonan warship, which killed 46 sailors, and the shelling of Yeonpyeong Island later that year.

At the time, the North reacted sensitively to the lights, threatening to respond with shell fire.

The tower was not lit in 2011, the year Kim Jong-il died, but the lights were turned on again in 2012. Last year, the government did not light the tower, saying it did not want the ceremony to influence inter-Korean relations.

The tower’s removal takes place at a sensitive time in inter-Korean relations, and while the Defense Ministry has cited safety concerns, the decision appears to be politically motivated for the South Korean government.

Seoul has proposed the meeting be held on Oct. 30, though Pyongyang has yet to respond.

Despite signs of reconciliation, the two countries were engaged in a series of gunfire exchanges at their land and maritime borders. Military tensions between the two Koreas flared most recently on Sunday, when the two sides exchanged gunfire near the border north of Seoul.

A senior Unification Ministry official denied yesterday that the Park Geun-hye administration had taken down the 43-year-old tower to please North Korea at such a sensitive time.

“We won’t do anything that will hurt national prestige for the sake of improving relations with the North,” he said.

He also spoke optimistically that the North would keep its promise to hold high-level talks because it was a decision sanctioned by North Korean ruler Kim Jong-un.

When delegates from Pyongyang visited the South on Oct. 4 and met with officials here, the North proposed that talks be held in late October or early November.

“When they proposed the time frame, I don’t think it was the decision of the top delegation,” he said. “They are the people who came here on the order of North Korean leader Kim. It remains to be seen if they will accept our proposal for Oct. 30, but I don’t think they will withdraw their acceptance for the high-level talks that were agreed upon on Oct. 4.”