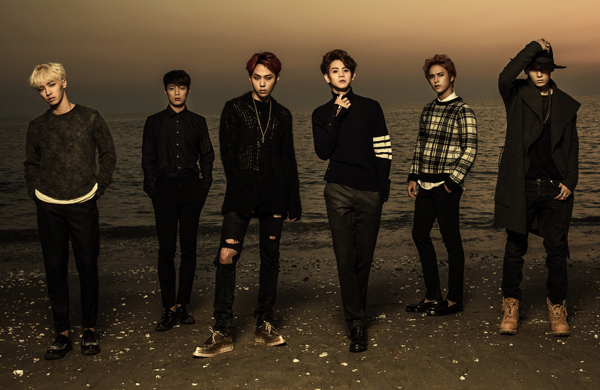 Idol group Beast released a new album to commemorate the fifth anniversary of its debut this week. The move surprised fans as the record came out just two months after one of its members spontaneously suggested the idea in public.

The group released a seven-track mini-album, “Good Luck,” in June.

During the group’s solo concert in August, Yang Yo-seob said he wanted to release another album in the fall and hoped that fans would like the idea.

The audience, of course, welcomed the announcement, so the band got busy.

“The comment was never discussed ahead of time with the other members and it put Jun-hyung under a lot of pressure,” said Yang in a recent group interview with Ilgan Sports, an affiliate of the Korea JoongAng Daily.

Yang is known as the band’s main songwriter in addition to being a performer. But the members were pleased in the end because it gave them the push they needed to finish their second album of the year at a time when they were meant to be practicing for next month’s Japanese tour.

Q. How do you feel about celebrating the fifth anniversary of your debut?

A. Yong Jun-hyung: It feels interesting. It’s delightful, but at the same time, I feel that it’s inexplicable. I’m also very proud of us. I think it’s more suitable to say I have mixed feelings.

Son Dong-woon: I keep thinking back to when we debuted. I’m very thankful that we’re celebrating our fifth anniversary because we feel like we’ve been under a lot of pressure since our group launched.

How would you evaluate your performance as a group over the past five years?

Yong Jun-hyung: I think Beast shares a little bit of itself each time - we never really jump into things. I think that’s what got us to where we are today. Those small moves have built us into what we are now. We’re much stronger.

How do you balance group activities with personal engagements?

Yoon Doo-joon: All the members agree that the group is our main priority. I think we felt that the value of our group depreciated when we were focusing more on personal engagements about three years ago.

Jang Hyun-seung: Of course, you need to give the best effort when you do your own thing, but you should never forget the identity you have as a member of the group.

It feels like Beast is getting more fans while other idols aren’t. Why is that?

Yang Yo-seob: I think that’s right. Like we said, we get this because we focus more on making the group stronger. Putting extra effort into the group actually benefits our individual gigs and the members all know that. We think that’s why fans appreciate us.

With the new album, you had to face competition against big-name veterans such as Seo Tai-ji and Epik High. How did you feel about that?

Yong Jun-hyung: We just needed to show who we are. Of course, we can’t show the sort of maturity they do, so instead of powering up to compete for a “better performance” [on local music charts], we focused more on better communication with fans through this album.