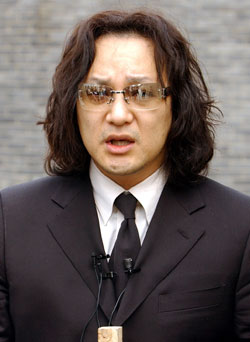 The 46-year-old musician Shin Hae-chul, often dubbed the “king of darkness” by his fans, died yesterday at 8:19 p.m., five days after suffering from cardiac arrest and losing consciousness on Wednesday. His family was at his side when he passed away.

According to staff at Asan Medical Center, where Shin was being treated in the intensive care unit, the direct cause of his death was cerebral hypoxia, a condition that restricts oxygen from reaching the brain.

Shin, who has been active in the music scene as a singer, producer and singer-songwriter over the past 26 years, became unconscious after he went into cardiac arrest. Medical staff at Asan resuscitated Shin, but he could not breathe without assistance and fell into a coma.


After the entertainer was transported to the emergency room, the medical team performed surgery on him to discover the cause of the cardiac arrest. Over the course of his treatment, doctors operated on his intestines, which were infected.

On Oct. 17, prior to suffering from the heart attack, Shin received abdominal surgery at a clinic located in Songpa District, southeastern Seoul, because he had been suffering from severe stomach pain.

According to KCA Entertainment, Shin’s agency, the musician had undergone gastric bypass surgery at the clinic in Songpa District five years ago.

Having debuted in 1988, Shin was one of the big names in Korean music history, with more than 30 studio albums.

Shin carved out a name for himself with rock but did not limit himself to just one genre. The versatile entertainer dabbled in various styles of music, including ballads, techno and jazz.

Some of his biggest hits include “To You,” “Don’t Say Goodbye” and “Jazz Cafe.”

Shin is survived by his wife, Yun Won-hee, and two children.

The musician’s memorial altar is No. 23 at Asan Funeral Hall in Pungnap-dong, southeastern Seoul.