LG forging ahead in energy sector

LG forging ahead in energy sector 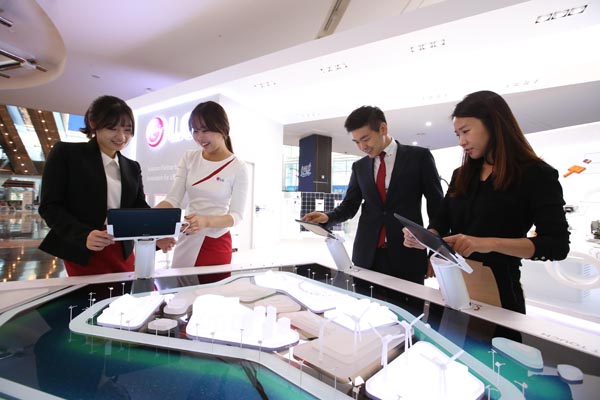 LG Group displays energy-related products and solutions including a miniature model of a smart microgrid at the International Convention Center on Jeju Island where the Conference of the Electric Power Supply Industry (Cepsi) kicked off yesterday. The smart grid allows efficient management of energy use in a city.Provided by the company

LG Group is stepping up its game in the energy sector by converging various technologies that are being researched and developed by its affiliates.

The next generation technology and energy solutions created by its affiliates, including flagship LG Electronics, LG Chem and LG CNS, are currently on display at the Conference of the Electric Power Supply Industry (Cepsi) held at the International Convention Center on Jeju Island.

The company has the largest display in the exhibition hall, covering 108 square-meters (129 square-yards) with products under the theme “Solution Partner for Energy: Innovation for a Better Life.”

One of the products on display is the company’s solar energy module Mono X NeON, developed by LG Electronics. It was named by the government last year as one of Korea’s top 10 next generation technologies and also won the Intersolar Award at the world’s largest solar energy exhibition in Germany.

According to the company, the solar energy module has a higher output efficiency than other modules and is also easy to install on a rooftop.

With a 60-cell panel design, it has a maximum efficiency output of 300 watts with 18.3 percent module efficiency, which is the amount of sunlight that can be converted into energy. It weighs 16.8 kilograms (35 pounds), which is 11 percent lighter than LG’s previous models.

“LG is leading the local market but securing a complete energy value cycle that includes [energy] production, storage and efficient management,” said an LG official. “As we have secured global leading technology and credibility, we plan to speed up our expansion in the energy solution business, both at home and abroad.”

In recent years LG has been ramping up its energy sector from solar modules to LED lighting and energy management and it has increased its efforts by converging the projects from its affiliates.

Key technologies that LG has been working on are its energy storage system and a battery that can be used on various products such as electric vehicles.

LG Chem is currently the global leader in energy storage systems and in next-generation batteries for EVs. Since July, the company has been running a 23-megawatt-hour facility - the world’s largest - in Iksan, North Jeolla. The facility stores energy when electricity is cheap and uses it when the price of electricity is high. This allows companies to save more on energy costs.

The deal is an opportunity for LG CNS to advance into the European energy market, where demand has been growing.

Working toward its goal to expand in energy solutions, LG Group last week held a groundbreaking ceremony for a new research and development center in Magok, southwestern Seoul. The tech conglomerate plans to invest 4 trillion won in the facility, which is scheduled to be completed in 2020.

The science park will cover 170,000 square meters, a space equivalent to 24 football fields. The conglomerate expects the park will accommodate 25,000 research and development personnel.

“In order to lead the market, we need to develop core and principal technologies and need to create differentiated values through convergence and mergers in a wide variety of industries,” said LG Group Chairman Koo Bon-moo during a speech at the groundbreaking ceremony last week. “In order to achieve our goal, we have to have a space where we can realize our innovative ideas that come from talents in different fields.”