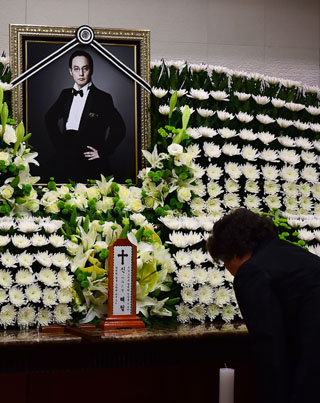 Many of Shin’s fans also swarmed to Asan Funeral Hall in Pungnap-dong, southeastern Seoul, yesterday. The musician’s family opened the memorial altar to the public from 1 p.m. to 9 p.m.

About 4,000 people paid a visit yesterday, according to KCA Entertainment, the late singer’s agency.

It has been revealed that Shin was working on a collaborative project before his death. Marking Seo Tae-ji’s comeback, a singer who has been absent from the music industry for five years, Shin and other icons of the ’90s music scene, such as Lee Seung-hwan and Kim Jong-seo, recorded Seo’s “Nineties Icon,” a track from his newest studio album released earlier this month.

“After the funeral, we will discuss with family and other musicians about the release of the collaboration project,” said an industry insider who is involved in the project.

Many of the nation’s radio shows played hits by Shin yesterday. Other music shows also announced plans to dedicate airtime to the late singer.