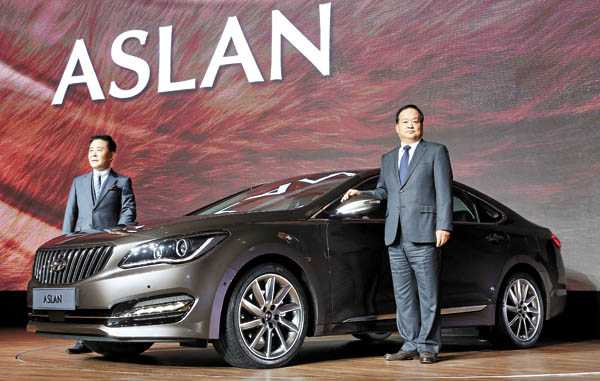 
Hyundai Motor has finally unleashed the Aslan that it hopes will recapture some of the ground it has lost to imports in the large premium sedan market.

Unveiled at the Busan International Motor Show in May, the Aslan arrives in showrooms today.

“This year, the company had a hard time attracting customers who were fascinated by German brands in the domestic market,” said Kim. “But I strongly believe that the Aslan will attract potential buyers who are considering a large sedan.”

The front-wheel drive is available in 3.0- and 3.3-liter VG GDI gasoline engines from the Lambda II family. With an eight-inch head-up display and navigation, it is equipped with high-end safety options, including forward-collision and lane-departure warning systems, and nine air bags.

The company said its goal is to sell 6,000 units this year and 22,000 next year. If the car is successful in Korea, Hyundai said, it may be exported to China, North America and the Middle East.

The Aslan’s target market is low-ranking executives in major conglomerates and buyers in their 40s and 50s. The company said it has more than 2,000 preorders and about 40 percent have come from conglomerates.

Major companies such as Samsung Group and Posco provide cars for executives. Hyundai’s premium Genesis sedan has been a popular option.

“About 48 percent of Genesis sales are to conglomerates,” said a company spokesman.

“We targeted customers considering the Mercedes-Benz E-Class or Lexus ES 350,” said Kim Sang-dae, director of domestic marketing. “Aslan is very comfortable to ride in and is offered at much lower prices.”