Shin will be subjected to an autopsy

Shin will be subjected to an autopsy 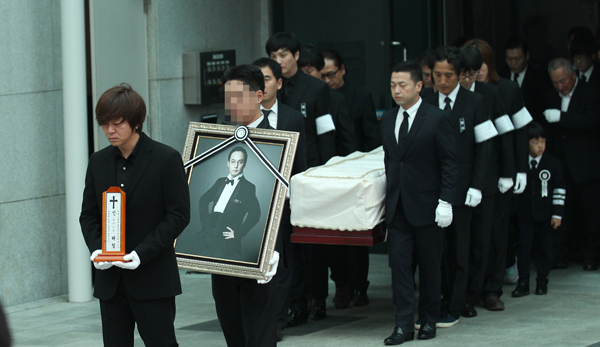 
Singer Shin Hae-chul, who died Monday of not fully explained causes at the age of 46, was set to be cremated yesterday, and fans gathered at Seoul Memorial Park in southern Seoul to bid him a final farewell.

But a last-minute decision by Shin’s family to have an autopsy performed means he won’t rest in peace for a little while longer.

A hearse carrying the corpse of Shin left Asan Medical Center yesterday at around 8:45 a.m. for Seoul Memorial Park, where Shin was to be cremated. Dozens of fans turned up thinking that in a few hours, Shin would be reduced to ashes. Many wept aloud with his relatives, friends and fellow musicians. After cremation, Shin’s remains were going to be placed at Utopia Memorial in Anseong, Gyeonggi.

But when the hearse arrived at the crematorium, the situation began to rapidly change.

A group of Shin’s fellow musicians - including Lee Seung-chul, Yoon Jong-shin and Psy of “Gangnam Style” fame - held a press briefing and announced that the cremation was off.

Veteran singer Lee explained that the musician friends requested Shin’s family to approve an autopsy and, after careful consideration, they did.

“If the body is cremated, [the cause of Shin’s death] will remain a mystery,” Yoon said. “We have to ascertain whether it really was a death from a medical accident or not.”

Questions have been swirling since Shin died after suffering a heart attack on Monday. The medical team at Asan Medical Center where Shin was being treated said the direct cause of his death was cerebral hypoxia, which is a condition that restricts oxygen from reaching the brain.

But on Oct. 17, he received abdominal surgery for adhesion of the intestines at Seoul Sky Hospital in Songpa District, southern Seoul, the same hospital where he underwent gastric bypass surgery five years ago to induce weight loss.

During yesterday’s press briefing, Shin’s musician friends said Shin’s family do not want the issue to end up in court, even after an autopsy is performed.

Yun said in an interview with Yonhap on Thursday that Seoul Sky Hospital conducted an “unassented” stomach reduction surgery on Oct. 17. She said Shin underwent the procedure voluntarily, but then the doctor, without receiving permission from either Yun or Shin, conducted the additional procedure of folding the top of the stomach to reduce its capacity.

She told Yonhap that Shin “was fiercely mad at the hospital at that time.” Yun also said Shin had complained of frequent pains in the stomach since the surgery, but the hospital assured the couple that nothing was wrong.

Seoul Sky Hospital has denied Yun’s accusations. Regarding her filing of the complaint to the police, the hospital said it will officially release its position in the near future.

An attorney for the hospital told one local media outlet that the hospital “had not conducted the gastric bypass surgery [on Oct. 17],” and added that “the doctor said he had taken all the needed steps” for Shin.

Meanwhile, the death of the ’90s pop icon has been generating a wave of sympathy among ardent fans and the general public. According to reports, more than 20,000 people visited visited Shin’s funeral altar at Asan Medical Center through yesterday morning. The funeral altar was open to the public.

Condolences poured in across all social media platforms. Since the news broke Monday, thousands of people have been posting their own stories and memories of Shin and his songs.

The grief was particularly deep among people in their 30s and 40s, who say Shin’s songs were a big part of the soundtrack of their college years.

“We enjoyed his songs and his existence,” said Kwon Mi-rae, 35, who visited Shin’s funeral parlor Wednesday evening, although she never saw him when he was alive. “The younger generation may think we are overreacting, but Shin was an icon who reminded us of our brightest days. We have so many memories that are linked to him. Losing him feels like we are losing our own youth.”