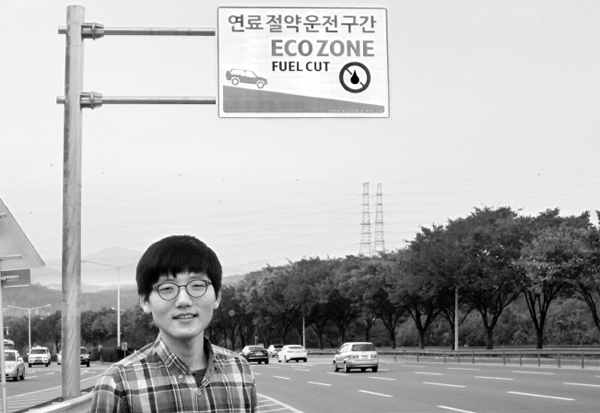 Ahn Jae-hyun stands Wednesday on Hoguk-ro in Buk District, Daegu, in front of an ecozone traffic sign he conceptualized. Provided by Ahn Jae-hyun

When Ahn Jae-hyun went on vacation last year to Jeju Island, the country’s most popular resort island often referred to as the Hawaii of Korea, it wasn’t the majestic scenery that caught his eye. The 18-year-old boy from Daegu, who calls himself “sensitive” and “delicate,” was more interested in its topography.

“I was interested in ecozones at that time,” he recalled in a telephone interview with the Korea JoongAng Daily on Monday. “When I went to Jeju and saw all those downhill roads, I thought this place could actually become a global leader in that field,” especially considering that it has already risen as a world-renowned tourist destination, he said.

There are many ways to define an ecozone, but Ahn was referring to the definition used by the Ministry of Land, Infrastructure and Transport, which puts it as a downhill road on which a driver takes his or her foot off the accelerator pedal and instead depends on the inertia to take the vehicle along. That way, one saves a little fuel, reduces carbon emissions and ultimately improves the environment.

And to boost Jeju into a world-renowned ecozone model, he knew just the right person for the job: himself. Cities like Daegu and Incheon had several ecozones during the time Ahn was solidifying his concept, but they were all ineffective, he said, because they were marked only by the words themselves painted onto the surface of the road.

Living in an “era of images,” Ahn thought the messages should be more visual and apparent so that drivers who rushed by could see and perhaps follow the advice.

With that idea in mind, Ahn further came up with a few key words - “eco” and “save fuel” - and shared his plans with a contemporary artist, a personal acquaintance whom Ahn said was happy to help free of charge. He submitted his idea to the Daegu city government earlier this year, and recently received the green light.

On Oct. 2, Ahn signed an agreement with the Daegu Metropolitan City office that allows the city to use and develop his idea for a decade without financial charges. Traffic signs related to the 18-year-old’s idea have already been installed on Hoguk-ro and Maecheon-ro in Daegu.

“It’s not common for a boy his age to come up with an idea like this for the city,” said Jeong Seul-kie, the deputy director of the Traffic Policy Division in Daegu’s city office. “And I admire him for showing so much enthusiasm in a field that not many people really care about.”

When asked whether the city plans to install more of Ahn’s traffic signs, Jeong answered that the project is still in its infant stages but that it has the potential to “grow into something bigger.”

“Not many cities in Korea have designated ecozones, so it’s really more about playing a pioneering role in this environmental field with Ahn’s idea,” she said. “From here, it’s all up to us to effectively promote this through some kind of green campaign.”

Ahn started off with a vague ambition to promote Jeju as the hub of ecozones, but now, he says he’s aiming at a much larger target - the world. Taking it step by step, he passed his idea on to other city government offices and recently received a call from Seoul officials, who said they believe it has “merits for further research.”

“When people praise my efforts and tell me I’ve done a great job, it’s then that I feel everything was worth it because I can sense warmth in their encouragement,” he said. “People say Korea is smaller than a single state in the United States. But when a single idea from a tiny city in that tiny country grows to influence the entire world, I think nothing could ever be more awesome.”