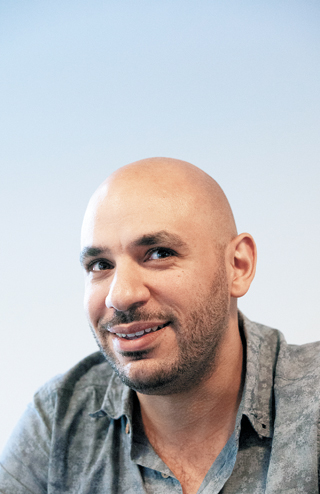 All it took was tteokbokki, or rice cake seasoned in pepper paste.

Samir Dahmani, a French cartoonist, has never been to Korea, or even Asia. But when he tasted tteokbokki in 2008 while studying art in Angouleme, southwestern France, it opened his eyes to an unknown land and triggered a curiosity toward people he had never met.

And today, he has published a book on Korea that features drawings of Korea’s streets, people and scenes. Titled “Samir in Strange Seoul [rough translation],” the book that contains sketches and short writings in Korean was released here on Oct. 24.

After imagining what the nation is like through his Korean friends, Dahmani finally visited last year when he was selected as an artist for the Korea Manhwa Contents Agency (Komacon) residency program in Bucheon, Gyeonggi. Manhwa means cartoon in Korean. 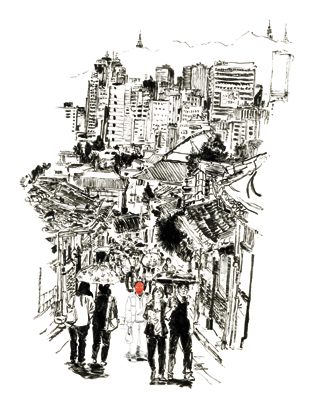 He drew the Korea he saw while on subway trains, in traditional markets, at tourist sites, palaces or just any random streets during his stay. The doodles are mostly black-and-white with very limited use of color.

“I have always been fascinated by American film noir of the ’40s, ’50s and ’60s which is black-and-white but uses special techniques using lights to lead viewers’ perspectives,” Dahmani told the Korea JoongAng Daily in an interview last week. “I also used color to lead readers’ perspective, so they can recognize [certain people or objects] amongst [crowds or scenes].”

Born in Franche-Comte in eastern France, Dahmani studied archaeology at a university in Lyon but changed his major and studied art at the European School of Visual Arts in Angouleme. He worked in New York before coming to Seoul.

One thing that appears often in his sketches is a red mask, malttuk, a character in Korea’s traditional mask dance. He is a servant [in Korea’s ancient dynasty with a class system] and is often in charge of revealing the incompetence or corruption of Korea’s ruling class. In Dahmani’s drawings, malttuk is often portrayed in red against a black-and-white backdrop.

When asked what the mask stands for in his sketches, the 33-year-old cartoonist said the “troubles” people experience in a foreign land, occasionally even in their homelands.

“Sometimes, people leave their countries to study or work elsewhere and come back only to feel like aliens as societies nowadays change so fast,” he said.

What is interesting is how Koreans do not smile in Dahmani’s sketches. In some drawings, they even look lonely. Dahmani said he saw few smiles on people’s faces here, which he found odd considering the Korean friends he has in France were so positive and curious.

“Through his eyes and hands, Korea is unveiled in the Dahmani-style and in the Korean style,” said Lee Hee-jae, Komacon chairman.

The sketches are available to view at Seoul City Hall starting Nov. 11. About 40 to 50 of Dahmani’s works will be displayed until the end of the month at City Hall’s library. Dahmani, who eventually wants to live in Korea, says he hopes through the book and his drawings that Korean readers will say, “Ah, I have been there. That could be me.”