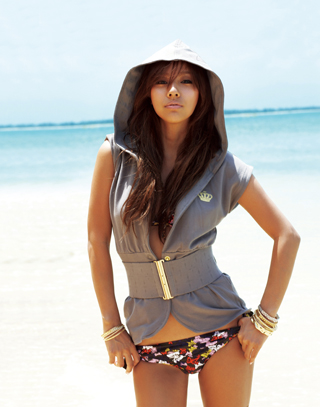 Although Lee has been hosting the SBS talk show “Magic Eye” on Tuesday nights, her bohemian lifestyle on Jeju as the wife of musician Lee Sang-soon has never before been telecast by any show.

When Yoo Jae-suk and Jung Hyeong-don, two members of “Infinite Challenge” arrived at Lee’s house in Jeju, she was harvesting soybeans in the front yard with no makeup on.

Both Yoo and Jung went to Jeju Island to ask Lee to appear in a special episode of the reality TV show. In preparation for the episode, all “Infinite Challenge” members visited K-pop icons of the 1990s to gather them together.

Lee, the former member of girl group Fin.K.L., was on their list.

When Lee was asked to perform as part of the ’90s girl group again, Lee said “I have lost contact with the other members. The last time we met was three or four years ago.”

The 35-year-old singer continued, “And other members also seek their own careers. So it may not be such a good idea.”

Although Fin.K.L.’s reunion does not look promising, Lee sang some of the group’s hit songs at her husband’s studio for the TV show.

Lee released her last album in May but she has been gaining more attention recently for her environment-friendly lifestyle, which is popular mainly among women in their 20s and 30s.