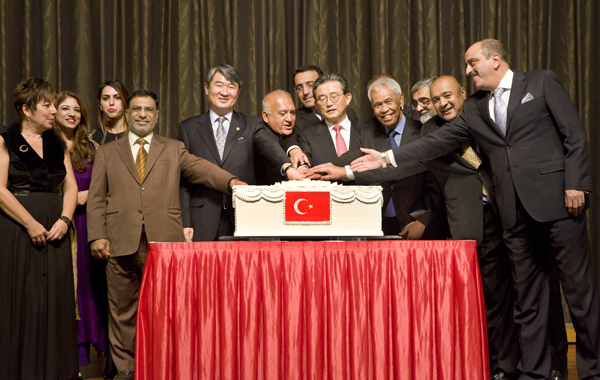 About 400 people gathered to celebrate the 91st anniversary of the foundation of the Republic of Turkey, a country located at the crossroads of Europe and Asia, on Wednesday at Lotte Hotel in central Seoul.

Guests lined up to enter the ballroom and shared the greeting merhab, which means “hello” in Turkish.

Hakan Okcal, Turkish ambassador to Korea, expressed his gratitude to those who came to celebrate in a speech. He also stressed that this year is particularly meaningful for Turkey because the country carried out its first ever direct popular election for its presidency in August.

Turkey elected Recep Tayyip Erdogan as its 12th president on Aug. 18. He was voted in after spending 11 years as the country’s prime minister.

Cho Tae-yong, first vice minister of foreign affairs, was among the guests at the event and made a congratulatory speech at its beginning. He emphasized the “brotherhood” of the two countries that “shared blood” as Turkey sent its troops here during the 1950-53 Korean War.

“When the Korean War occurred, 15,000 Turkish veterans came to Korea to defend the liberty and peace of Korea, and 721 of them lost their lives,” said Cho. “We will never forget the courage of each Turkish veteran.”

Cho referred to kan kardesh, meaning a brother by blood in Turkish, to describe the ties between Korea and Turkey.

Later on, Korea’s folk song “Arirang” and Turkey’s “Katibim” echoed in the ballroom.

Guests enjoyed a buffet soon after, but the line for Turkish ice cream in the corner did not seem to reduce until the two-hour reception had almost wrapped up.

The seller joked around and played tricks with people by using the ice cream, “a common scene in Turkey,” according to 12-year-old Turkish national Mine Atanman.

“They do that especially to children,” said Atanman, who was wearing the traditional clothes of his nation. “Turkish ice cream is special because it is very chewy.”

Meanwhile, Enes Kaya, a panelist on the popular JTBC talk show “Non-Summit,” was also among the guests. He has not once missed the event in the 13 years he has lived in Korea.

“There are not many Turkish people in Korea, there are about 500,” he said. “And it always has been a good chance to meet some Turkish people who I have not met in Korea. I feel proud of my country as a Turk on a day like today.”