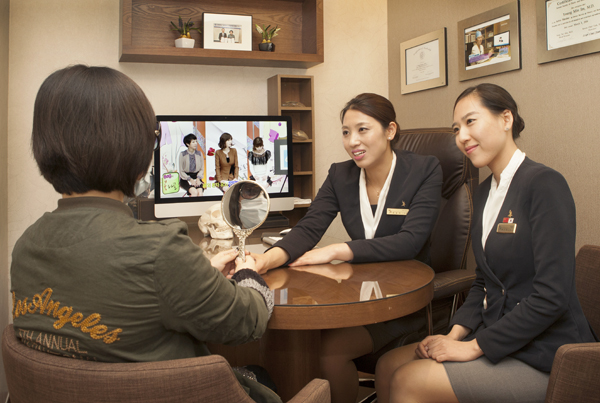 Li Dingshun, center, a Chinese receptionist with Korean-language skills, and Hong Jin-hwa, right, consult with a Chinese patient from Shanghai Wednesday, who had plastic surgery a few days before, at JK Plastic Surgery Clinic in Gangnam District, southern Seoul. By Park Sang-moon


Hong Jin-hwa left Korea in 2003 to live in China with her family. In July 2013, she graduated from prestigious Tsinghua University, whose alumni include former and current Chinese presidents Hu Jintao and Xi Jinping.

Today, Hong is dressed in a sleek medical clinic uniform with a Chinese national flag pin on the left side of her chest. She smiles brightly as people enter the JK Plastic Surgery Clinic on affluent Nonhyeon Boulevard in Gangnam District, home to the more than 500 plastic surgery clinics that have given Korea the reputation as the most looks-obsessed nation in the world.

Two months ago, the 23-year-old English major started work at one of the largest plastic surgery clinics in Korea.

“I noticed how fast the industry was growing in large part thanks to an explosive number of foreign patients coming here,” Hong says. “I wanted to contribute my part to the growth.”

Hong is one of the 15 receptionists at JK dedicated to pampering patients who have flown in from China.

“The fact that I could use my Chinese language skill also appealed to me,” she says.

Hong’s job duties range from squiring patient in and out of consulting rooms, bringing them cups of coffee and even giving preliminary surgical consultations before patients see doctors. She helps patients overcome trepidations ahead of operations.

Hong represents a new kind of skilled worker: someone who can cater to the rising number of Chinese visiting Korea for tourism, to see K-pop concerts - or to have their faces changed to look like K-pop idols.

Jenna Hyun, who heads JK’s public relations team, said two of the 15 receptionists catering to Chinese patients are Koreans with Chinese language skills. All other cosmetic surgery clinics in Gangnam District hire Koreans for the same purpose, she says.

Recent data proves that Hong has entered the right industry at the right time. According to figures from the Ministry of Health and Welfare, the number of foreign patients who went under the knife for cosmetic purpose in Korea last year increased to 24,075 from 2,851 in 2009, an almost 10-fold increase over a five-year period.

Considering smaller clinics with lower profiles, the actual numbers are likely much greater.

“At first, we hired Chinese staff of Han ethnicity who could speak Korean,” said Hyun of JK’s public relations team. “But we recognized that what we also needed were Koreans with Chinese skills to better communicate with the medical staff here since our job involves medical vocabulary and knowledge.”

The PR team manager said providing the translation service for Chinese patients either with Han ethnicity Chinese or Korean staff makes them feel “at ease” and “suits their high nationalistic pride.”

“When they see me greeting them in Chinese, they all express their surprise and delight in meeting Chinese staff here,” said Li Dingshun, one of the 13 Chinese coordinators at JK’s clinic.

With so many Chinese coming to Seoul to get their eyes double-lidded, noses tweaked and jawbones reduced - the classic Korean plastic surgery trifecta - it’s become commonplace to pass Chinese tourists in downtown Seoul and Gangnam District with shopping bags and face masks, sunglasses and caps hiding surgical bandages.

Cosmetic surgery is now ingrained in Korea, as seen in the giant before-and-after pictures of patients filling the walls of subway stations with captions that extol the greater life available on the other side of a surgical enhancement or total makeover. But surgery used to be something to be embarrassed about. Celebrities used to deny that they had surgical help to appear more attractive until the early 2000s.

Today, the days of shame are long gone. One in five Korean women is reported to have received cosmetic procedures, according to Trend Monitor, a market-research firm, in 2009. And men are catching up.

It’s no secret that most K-pop idol group members have been to the cosmetic surgery clinics and that has done the most to spread Korea’s reputation in Asia as the place to go for a head-to-toe transformation.

“Chinese people have beauty standards similar to ours and tend to model themselves on Korean women,” said Choi Hang-seok, a surgeon at JK clinic.

“The fact that Korean clinics are equipped with cutting-edge equipment and have much higher hygienic and safety standards than clinics in China has led many to prefer to get their surgeries done here.”

PR team manager Hyun said one big difference between Chinese and Korean patients is that the former tend to receive head-to-toe makeovers from, spending easily over 10 million won during a week or so in Seoul.

“I received a jawbone reduction and wrinkle removal surgery last week,” said a 25-year-old Chinese woman from Shanghai, who wished to be identified only as Miss Li. She said she spent 4 million Chinese yuan, or $6,538, for her operations.

Li, wearing sunglasses and a face mask, said she had chosen JK Plastic Clinic after her friends in Shanghai recommended it.

When asked about the services provided by the clinic - translations, consultations, and help getting around - Li said, “I didn’t feel I was in a foreign country. I felt right at home.”