Director puts tradition back into gugak

Director puts tradition back into gugak 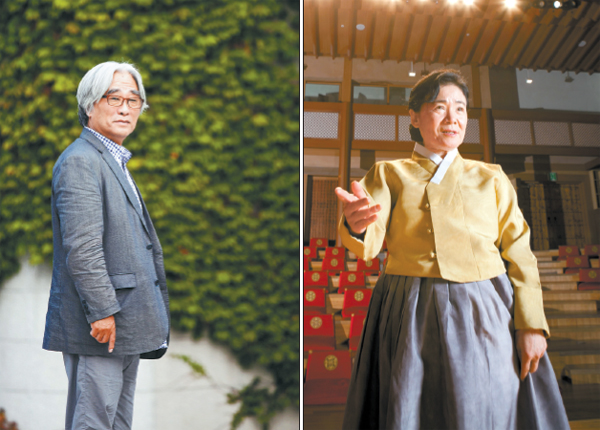 Although the cast includes pansori (narrative singing) master Ahn Sook-seon, the National Gugak Center’s “Gongmudoha” is not a changgeuk, or a traditional Korean opera performed to music.

The performance’s director and screenplay writer Lee Youn-taek insists that the upcoming show is “traditional Korean musical theater” that seeks to find a “prototype for Korea’s long-lost performing arts.”

“The main difference between this musical theater piece and other changgeuk performances,” said Lee, “is the fact that I’ve written a screenplay from scratch after being inspired by an ancient poem. Although pansori is included, I’ve added different types of Korean music on top of the actor’ lines.”

Another difference is that “Gongmudoha” has a chorus, which is not typically seen in a changgeuk.

“I’ve put together the various functions Korean music has in this theatrical piece,” said Lee. “There’s going to be Seodo sori (narrative singing) as well as jeongga and beompae.”

Jeongga, beompae and pansori are the three major genres that use vocals in traditional Korean music.

“Gongmudoha” is an ancient poem considered to be Korea’s first. It’s in a form of a quatrain and laments the departure of a loved one who crossed a river.

“I discovered the structure of a play in this short quatrain,” said Lee. “It’s a drama itself. All I needed was the script and the music.”

Lee, 62, is dubbed a “guerrilla artist” and a “theater maestro” and has been making endless efforts to promote true Korean theater - not just the content or the synopsis but also the style - asserting that recent plays and performances here have become too Westernized.

Lee established a theater research center in 1994 and began to “dream about staging and finding a genuine Korean theater that’s composed of our language, our sound, our movements and our thinking structure.”

The poem’s history is not the only reason Lee selected it as the base of his upcoming performance. It’s because the poem itself also is very Korean in its linguistic use.

“You can call me a nationalist,” said Lee. “I am also a poet, but I wanted to give up writing poetry because I felt like what I was writing was not genuinely Korean. There’s no passive form in Korean, but the poems I wrote or read, it felt like they were translations of English poems.”

Under one title - “Gongmudoha” - two separate stories unfold in an omnibus format for Lee’s show.

The first half of the story centers on Baeksugwangbu, the main male character. He lives in the present time but accidentally time travels 2,000 years back to a former life while wandering around the neighborhood in search of his house because he has forgotten his new address.

The second half of the performance is the story of a South Korean man and a North Korean woman.

The man falls in love with the woman, who works at a restaurant in Yanji City, China. He decides to marry her and even adds her four-year-old boy to his family register. But she suddenly disappears. Believing that she was dragged back to the Communist regime, the man decides to cross the Amnok River into the North and the story unfolds.

“So far, the gugak center has put its focus on the legitimacy and history of gugak. I feel it’s a little late, but we must add nowness and universality without losing tradition. In that sense, this performance will appeal to the audience while not driving them outside the fence of gugak. Lee said that’s his version of ‘modernization’ and I could not agree more.”

However, Lee, who claims to have turned his back on “mainstream influence and cultural hegemony” wants to see diverse genres of performing arts that are not too resistant against each other.

“What most concerns me these days is that many artists are falling into what I call ‘closed-genre collectivism,’?” said Lee.

“Many artists in theater have pointed their finger at me, asking ‘what is Lee doing over there with the gugak musicians?’ and suggesting that I am doing part-time jobs for money.

“Meanwhile, gugak musicians constantly tell me that certain performances should be seen as gugak not as theatrical plays. But what I am trying to do is to find a prototype for Korean performing arts, and this is the beginning.”

Lee stressed that he wants people to be open-minded in watching the show while trying not to categorize it into specific genres.

“This is just my attempt to show people what true Korean musical theater looks like,” Lee said.

Pansori master Ahn, 65, who served as the artistic director of the National Changgeuk Company in the late 1990s, said that she feels comfortable working with Lee as she has also been constantly questioning herself about what the genuine form of Korean performing arts is over the years.

“I’ve been doing changgeuk since I was 9 years old and went to so many overseas countries to stage Korean traditional performance,” said Ahn.

“But the more I get on in years, I began to question myself whether this performance I do is truly Korean. Sori is certainly traditional but all the rest such as installations, costumes and so on, have become somewhat foreign. Since my vision at the National Gugak Center is to create something new while keeping the tradition, I am very excited to work with Lee.”

“Gongmudoha” will be staged from Nov. 21 through 30 at the National Gugak Center, which is located next to Seoul Arts Center in southern Seoul.