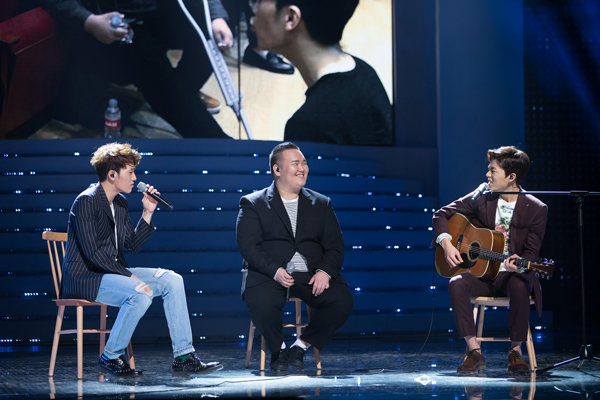 From left: Singers Kim Feel, Lim Do-hyuk and Kwak Jin-eon reunite for a special performance on Friday during a live show on Mnet’s audition program “Superstar K6.” They sang “Only You” again, reproducing the same resonance and harmony that earned them immense popularity when they first performed the song in September. Provided by CJ E&M

When Mnet’s audition program “Superstar K” experienced a slump last year, many critics considered it to be an end of an era for TV shows of its type in Korea. But the latest season has successfully resurrected the series.

Season six, which kicked off in August, is recording an average of 4 to 5 percent viewership rating per episode. It is the No. 1 cable show in its time slot, and many of the songs covered on the show are constantly ranking high on local music charts.

Many changes have been put into place in the latest season for the sake of revitalizing the program. Yoon Jong-shin, one of the judges on the show, said that “boldness” was the key factor propelling the show forward.

“Our show’s producer, Kim Moo-hyun, boldly abandoned all parts that were pointed out as the program’s shortages during the past seasons, such as excessive storytelling about the candidates and the form of editing the program to create more tension,” said Yoon at a question-and-answer session with local media on Friday at Kyung Hee University’s Great Peace Palace in eastern Seoul, where the live performances are staged.

“He drastically gave all of that up and focused only on the talent and the choice of songs.”

As a result, the pace of the program quickened and candidates who really have what it takes were selected instead of those who grabbed the public’s attention because of their heart-wrenching stories.

“In past episodes, I sometimes wondered if the candidates who advanced to the final rounds deserved to be there,” said Baek Ji-young who joined sixth season as a judge.

“But now, when I see the final candidates on stage, I feel like they don’t have any flaws regarding their singing skills. It’s only a matter of preference and individual charm from now on.”

Another factor that won the program the recent popularity boost is its expansion of musical genres.

When the two singer-songwriters Kwak Jin-eon and Kim Feel interpreted Lee Chi-hyun and His Friend’s classic “Only You” and Deulgukhwa’s “Don’t Worry” in their own folksy way, the cover versions went viral online and ranked high on local music charts.

Folk and acoustic were considered non-mainstream genres until recently.

“I think viewers’ votes are not confined to genres anymore. In the first and second seasons, we mainly talked about R&B and traditional ballads. Then hip-hop started to emerge at some point and now it has expanded even more,” said Yoon.

“Now, folk and indie-oriented singers like Kwak and Kim are definitely the strong players, which I think is the most impressive part about our latest season. I think the viewers throw their votes to good songs and singers’ certain charms, not to particular genres.”

During the live performance on Friday after the media interview, the competitors’ popularity could be compared to that of idol stars. A wide spectrum of fans ranging from high school students to middle schoolers flocked to Kyung Hee University to cheer on their favorites.

Kim, who sang to Lee So-ra’s “Wind is Blowing,” once again received the highest points from the judges, while traditional ballad singer Lim and five-member rock band Bustered ranked in the bottom two to be voted out of the competition.

However, the judges used the “Super Pass” system for Lim, which saves one candidate from being thrown off the program regardless of the result of the vote.