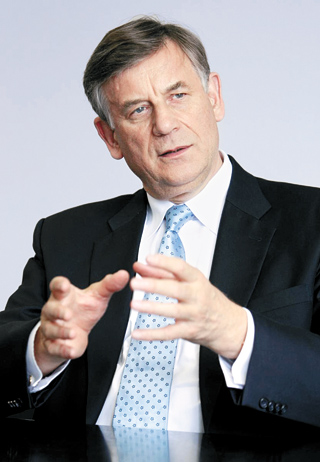 
German management expert Hermann Simon is the man who coined the term “hidden champion” to describe a world-leading company in its field that goes largely unnoticed.

The management guru has advocated the need to recognize those hidden champions, saying lesser-known specialized companies were the backbone of Germany’s resilient economic growth in recent years.

The advice sounds especially relevant to Korea, since Germany and Korea are both export-oriented nations with limited natural resources.

Simon, the founder and chairman of the Strategy & Marketing Consultants division of Simon-Kucher & Partners and a former business professor at prominent universities worldwide, participated in a discussion forum last month with members of the Institute of Global Management at the headquarters of his consulting organization based in Bonn, Germany. The Institute of Global Management is a Korean research and executive education organization.

Simon also is a distinguished professor at Harvard Business School, Stanford University and the London Business School. He has been hailed as one of Europe’s most prestigious management gurus since the late Peter Drucker.

At the meeting, Simon emphasized the importance of hidden champions for a flourishing economy.

“Over a 10-year period, Germany’s per capita exports were $153,936. That’s twice as much as other large countries achieved,” he said. “The driving force behind this is not big corporations. It’s little-known hidden champions and their contribution to exports.”

He said 70 percent of Germany’s exports are by small and medium enterprises. On the other hand, Korea’s SMEs account for only 19 percent.

Simon’s research over the last 25 years uncovered a roster of those hidden champions and traits common to such companies, which he describes in his book “Hidden Champions of the 21st Century: Success Strategies of Unknown World Market Leaders.”

According to Simon, there are 2,734 hidden champions worldwide and 1,307 of them, or 47 percent, are from Germany. They account for one-quarter of Germany’s exports.

The expert defined a hidden champion as a company among the top three in its field in the global market or No. 1 on its continent that has less than $5 billion in annual revenue. At the same time, it is not well known to the general public.

The United States has the second-highest number of those companies, followed by Japan and Austria.

The competitive advantages of hidden champions are mostly based on innovation, product quality, focus and expertise, as well as great leadership and marketing acumen.

“If you specialize in one field, the market size can be small,” he said. “But hidden champions overcome this by exporting their products. They constantly innovate through research and development and maintain their edge over other competitors.”

In this regard, he said, hidden champions set extremely ambitious goals pertaining to market leadership and growth.

Using this approach, those lesser-known companies have achieved average annual growth of 10 percent over the past 15 years, quadrupling in size.

For the 10 CEOs of small and medium companies in attendance, he advised sticking to fundamental principles, while exhibiting flexibility in achieving those principles.

Through this type of leadership, Simon said, a company can be an efficient organization with high productivity.

“The employee turnover rate of German hidden champions is really low - only 2.7 percent,” he continued. “This is far below the overall average in the United States and Germany.

“This is because workers feel proud of what they produce in the company and attach high value to what they are doing.”

Simon also warned of the excessive pursuit of diversification of business portfolios, saying it can expose companies to greater risks and competition.

The management expert, however, noted that Korea often overlooks those hidden champions.

“I think Korea’s university entrance rate - which hovers about 80 percent - is a bit excessive,” he said. “And those college graduates and highly skilled young people often set their eyes only on conglomerates.

“In Germany, excellent technicians at SMEs get paid far higher than college graduates and they are genuinely respected.”

He added that Korea needs to foster a culture that respects specialists who devote dozens of years to a specific field.

“Korea is now doing fine and looks good. But when things don’t go well and big players happen to collapse, the country as a whole could face tremendous hardships.

“So this is why it carries more importance in Korea when we discuss the crucial role of smaller but competitive companies.”

Simon called on Korea to focus on developing more hidden champions to achieve resilient growth in the future.

Along with the stern advice, Simon expressed affection for Korea.

“My son is now working for a global consulting firm. He said that the two branches with the highest outcomes are Germany and Korea.

“Germany shared the experience of division and it also went through economic development from scratch. Thanks to these common traits, I feel close to Korea and have many friends in this country.”

He said the world is entering the globalized future of “Globalia” - a place that offers unlimited growth opportunities.

The age of Globalia will likely present opportunities for hidden champions.

“Hidden champions not only revive the economy through exports, but they also can create more jobs than big corporations, so they can contribute to addressing the issue of unemployment.”

He acknowledged it would be challenging to plant German’s successful model in other countries, but other countries can learn the system embedded in hidden champions.

“It would be hard to create identical model oriented to hidden champions in countries with different cultures and economic systems,” he said. “But it is possible to enact management know-how, value systems and training systems utilized by such companies.”