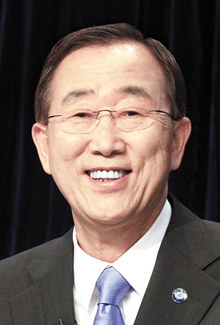 Talk of United Nations Secretary General Ban Ki-moon running for president in 2017 has swept the political sphere this week and a number of senior political figures claim his aides are putting feelers out.

A recent poll put Ban, a former foreign minister, on top of a list of possible candidates.

Though speculation that the career diplomat might opt to run for the presidency has been around for some time, it was the first time senior figures from the opposition establishment gave them a basis in reality.

The wave of rumors was touched off by a remark by former lawmaker Kwon Rho-kap on Monday during a book-publishing event, when he revealed that he was approached by Ban’s confidants, asking him whether the UN’s top man could run as a candidate representing the main opposition party.

“Those in the circle close to Ban relayed a message to me that they wish Ban to run in the presidential election for the New Politics Alliance for Democracy,” said Kwon, an aide to former President Kim Dae-jung.

The 84-year-old politician, who retired from politics, added that he hoped Ban would take part in the presidential primary of the NPAD.

In a radio interview with PBS yesterday, the NPAD’s Rep. Park Jie-won, who was Kim Dae-jung’s chief of staff, said he understands there are many groups loyal to Ban that have been making headway for a presidential bid.

Ban completes his second five-year term as the head of the UN in 2016, a year before the presidential election to pick the successor to President Park Geun-hye. Both the ruling Saenuri Party and opposition NPAD have been eyeing possible political moves by Ban.

A recent survey put Ban far ahead of other potential candidates. In a poll conducted by Hangil Research of 1,000 adults nationwide on Oct. 17 and 18, Ban topped the list with 39.7 percent support compared to 13.5 percent for the second most popular lawmaker on the list, Seoul Mayor Park Won-sun of the NPAD. Behind Park was former opposition presidential nominee Moon Jae-in with 9.3 percent, trailed by Saenuri Chairman Kim Moo-sung with 4.9 percent.

Though Ban is widely respected in Korea for leading the world’s largest multinational organization over the past seven years, the 70-year-old is not entirely free from criticism that he lacks enough leadership to be the president. Ban is also described as “a bureaucrat to the bone,” and his leadership of the UN is not always praised.