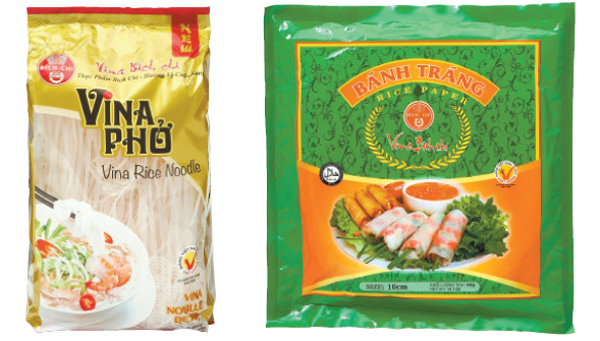 Vietnamese rice noodles, left, and rice paper.Provided by the company

Lotte’s discount supermarket Lotte Mart has introduced Vietnamese products in its stores to celebrate the 22nd anniversary of diplomatic ties between Korea and Vietnam on Dec. 22, 1992.

From today to next Wednesday, five stores in Seoul and Gyeonggi - Guro, Seoul Station, Ansan, Uiwang and Jamsil - will discount 120 Vietnamese products that were rarely seen in Korean stores at such prices.

It has been more than 20 years since Korea and Vietnam established diplomatic ties. Meanwhile, Korea has become one of the major importers of Vietnamese products, but Koreans still lack access to high-quality Vietnamese products.

According to the Korea Customs Service, Korea’s imports from Vietnam recorded 7.7 trillion won ($7.1 billion) last year, which is 125 times higher than the imports in 1992. However, more than 30 percent of the imported products are clothing and footwear.

Lotte Mart aims to introduce unfamiliar Vietnamese goods to its customers and has put food at the center stage of its promotions. The company said the recent trend of enjoying imported food from around the world was behind the selection of the items.

Lotte also held a local version of the event in Vietnam last July. Vietnam’s Ministry of Industry and Trade, the Korean Embassy in Vietnam and the local Lotte Mart prepared a special market to introduce 1,000 products from leading local companies for 10 days. The company dispatched a merchandiser to the event to consult Vietnamese companies wanting to launch their products in Lotte Mart.

In addition to securing high-quality Vietnamese goods, the company also doubled the size of its imports from Vietnam.

“Lotte’s South Saigon store in Ho Chi Minh City, which opened in 2008, was the first Korean discount store to open in Vietnam,” said Nam Chang-hee, head of products at Lotte Mart. “We will continue our citizen diplomacy by bringing various Vietnamese products to Korean consumers.”