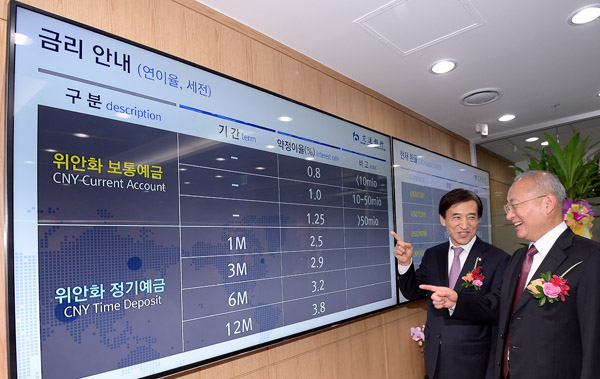 BOK Gov. Lee Ju-yeol, left, and Niu Ximing, chairman of China’s Bank of Communications, right, point at interest rates for the Chinese yuan current account and time deposit, displayed on a board on a wall of the Chinese bank’s branch in Euljiro, central Seoul, yesterday. [NEWSIS]

To smooth transactions and step up the use of local currencies in trade between Korea and China, China’s Bank of Communications branch in Seoul officially launched its clearinghouse services yesterday.

The Bank of Communications, designated by the People’s Bank of China, will be the primary channel for won-yuan transactions.

The bank will have direct access to yuan from the Chinese government and supply liquidity at favorable rates to selected Korean commercial banks.

Due to the recent high volatility of the U.S. dollar and Japanese yen, many exporters to China are expected to switch to the yuan to minimize risks in the foreign exchange rate, government officials said.

“In order to boost won-yuan transactions, we need businesses to expand their payments in yuan,” said Finance Minister Choi Kyung-hwan at the opening ceremony for the clearinghouse, which was attended by Bank of Korea Gov. Lee Ju-yeol and other dignitaries. “There will be no need to pass through Hong Kong, which will make companies’ financial transactions easier.”

“Korea and China have established an opportunity to increase economic and financial cooperation with the yuan clearing bank,” said BOK’s Lee. “Until recently, Korea’s use of the yuan has been relatively limited, but from now on, trade payments in the Chinese currency will increase, as well as financial products involving the yuan.”

Establishment of a direct won-yuan exchange market was agreed to by the Chinese government in July during President Xi Jinping’s visit to Seoul.

Until recently, the U.S. dollar was the only currency directly traded in Korea.

In the late 1990s, the Korean and Japanese governments opened a direct won-yen trade market, but it closed in less than four months due to a lack of participating institutions.

“Based on the failure of the won-yen market, the central bank designated 12 local commercial banks that will promote yuan transactions,” said an official at the central bank.

The Ministry of Strategy and Finance said it will create an electronic infrastructure, systems of governance and bring a sense of hope” to Korea after it was devastated by the 1950-53 Korean War.

Mark Lippert, the new U.S. ambassador to Korea who arrived in Seoul last week to succeed Sung Kim, also attended the function commemorating the anniversary with his wife Robyn.

While participants agreed on the need to forge an inclusive institution such as the European Union, Ren Xiao, who teaches Internal Politics at Fudan University in Shanghai, said suspicions were common in China about the U.S. pivot policy.

“For many Chinese analysts, quite a few problems that emerged in China’s neighborhood are related to this strategy,” said Ren.

He said Chinese scholars believe that U.S. involvement in Beijing’s maritime dispute with the Philippines, as well as with Japan over territories, has led to increased mutual distrust between the two nations.

“[Some in China] think that Washington has taken actions attempting to counterbalance China and its influence,” he said.

He cited a prediction that China will “overtake the U.S. to become the world’s largest economy” and said that as a result, the Untied States will be in a position where “the spirit is willing but the flesh is weak” in its dealings with a resurgent Beijing.

Prof. Park Jin of Hankook University of Foreign Studies also acknowledged challenges to regional cooperation due to historical and territorial disputes among Korea, Japan and China.

“Meanwhile, high tensions and instability continue to be the status quo in various parts of the Asia-Pacific such as the East China Sea, South China Sea, the Taiwan Straits and the Korean Peninsula, just to name a few,” Park said.

Park went on to say the “absence of close strategic coordination in Asia” has hindered some progress of Asia despite “its enormous potential.”

During a question-and-answer session, Lee Hong-koo, prime minister in the Kim Young-sam government, questioned what he described as reluctance by Beijing and Washington to lead the way in resolving the gridlock over North Korea’s nuclear program. He called their behavior “very strange” considering their influence in the region. Lee said Beijing and Washington seem content with the status quo on the Korean Peninsula and wish to “keep the current situation as long as there is no war.”

David Steinberg, professor of Asian studies at Georgetown University and a senior consultant to the Asia Foundation, said this may be because Chinese officials firmly believe North Korea will “never use its nuclear weapons against it.”