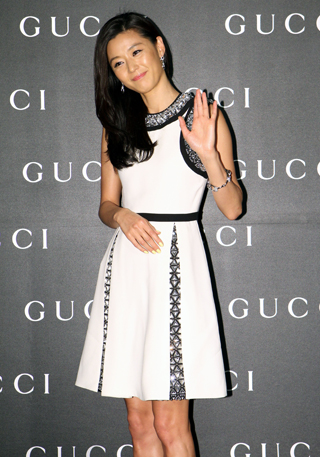 Actress Jun Ji-hyun has been chosen to represent Gucci’s accessories line in Asia.

“We chose her because she represents Asia,” the luxury brand said in a statement released yesterday.

Jun will promote Gucci’s eyewear, watches and jewelry. The very first advertising campaign featuring the 33-year-old actress will be shown across Asian countries starting next year.

Jun left for London yesterday to shoot the commercial and will work with Norwegian-born photographer Solve Sundsbo.

The actress has been developing a close relationship with Gucci and has showed up for many of the company’s official events over the past few months.

Having debuted in 1997 as a cover girl on a fashion magazine at the age of 16, Jun has been a favorite of advertisers. But she also came under fire for this, with critics saying she focuses too much on her work outside of acting.

After she got married in 2012, however, Jun enjoyed a second heyday.

The 2012 blockbuster film “The Thieves,” which featured her, attracted 10 million moviegoers. Jun’s recent drama series “My Love From the Star” also became a sensation when the series was aired earlier this year.