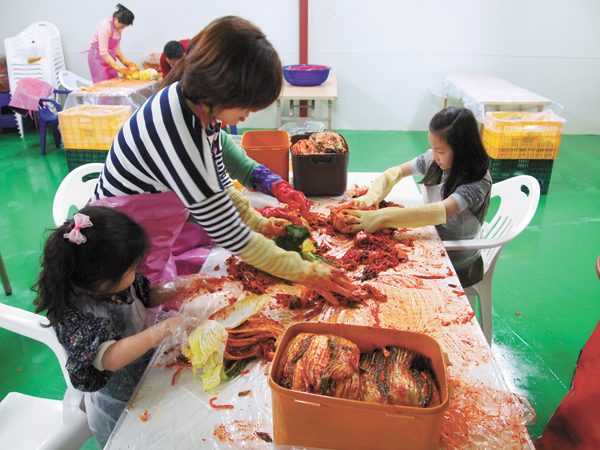 Kimchi-making tours are becoming popular because they are a convenient way to make kimchi. Provided by Welli Hilli Park

Kimjang, the process of making and sharing kimchi, is less popular than in the past. People used to use at least 100 Napa cabbages in preparation for a long winter, according to documents that describe modern Korean history, but households now use between 20 and 30 cabbages on average.

This doesn’t mean that Koreans don’t enjoy kimchi as much. The staple is still used in every imaginable way: in classic stews, with stir-fried rice, paired with tofu and as a side dish for soju.

As a result, private companies are targeting people who want enough kimchi to last through the winter but who do not have the necessary knowledge to make it.

The basic kimjang program for two people includes a night in a standard room, 10 kilograms (22 pounds) of kimchi, two meals and access to the sauna or swimming pool. The package is priced at 147,000 won ($136).

Considering that the price of mass-produced kimchi is between 50,000 won and 60,000 won per 10 kilograms, the package is quite economical.

“We launched the kimchi package last year and housewives really liked it because they could make kimchi easily,” said Ahn Seung-gil, who promotes the package.

According to Ahn, the cabbages are already salted by nearby farmers who cultivated the kimchi ingredients. The marinade is prepared by them, too.

“Housewives often say that the most complicated procedure of kimjang is salting the cabbage, which takes a full day. All they have to do is stuff the cabbage with marinade mixture,” added Ahn.

Sprinkling salt over the cabbage allows it to become tender enough to make kimchi. But a person has to wake up every two or three hours to move the cabbages around, making sure they are evenly salted and squeezing the water out. For this reason, many people order pre-salted cabbage from kimchi factories.

Food company Dongwon F&B runs one of the nation’s longest-running kimchi tours. The program, which is in its 15th year, is popular among housewives.

“We have regulars who come to the factory for kimjang every year,” said Kim Il-gyu, a public relations representative at Dongwon.

The tour costs 85,000 won per person, which includes transportation from Seoul to a kimchi factory in Jincheon, North Chungcheong. The tour also includes lunch, light snacks, 10 kilograms of kimchi and one kilogram of fresh kimchi.

CJ Cheiljedang, on the other hand, sells a limited DIY kimjang package around this time each year. Order online and enough kimchi marinade to stuff and coat 10 kilograms of salted cabbage will be delivered to you.

“The DIY package will be launched two weeks from now,” said Lee Hye-jin, who promotes CJ Cheiljedang. “Since we source cabbages and all the ingredients from our clients every year, the price for the DIY package doesn’t fluctuate according to the prices of cabbage and other agricultural prices each year.”