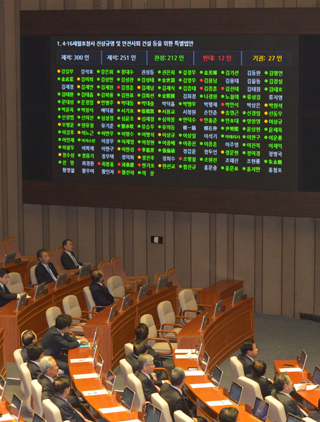 The National Assembly yesterday passed a package of three bills related to the Sewol sinking. [NEWSIS]


The National Assembly yesterday passed a package of three bills related to the April 16 Sewol sinking after months of political wrangling that shut down all parliamentary activity for five months.

The passage of the bills comes 205 days after the April 16 sinking, in which more than 300 people died.

The most important of the three bills, the special Sewol law to investigate the cause of the sinking and the abysmal rescue operations, was overwhelmingly passed by 212 to 12 votes. Twenty-seven lawmakers abstained.

Under the bill, a 17-member special investigative committee will be formed to probe the sinking. A special prosecutor nomination committee will also be formed to name two candidates for President Park Geun-hye to choose from. The two candidates will come from a pool of four proposed by the ruling Saenuri Party and the opposition New Politics Alliance for Democracy. The parties’ choices of nominees will all be approved by the relatives of the people who died in the Sewol.

The second bill aims to reorganize some branches of the government, including the Coast Guard, which disgraced itself by barely saving anyone from the sinking Sewol. Its management will be shifted to a new office of public safety under the Prime Minister’s Office, a reshuffle the government says will allow it to better respond to crises like the Sewol. The Government Reorganization Act was passed by 146 to 71 votes, with 32 lawmakers abstaining.

The third bill, named after Yoo Byung-eun, the late patriarch of the family that owned the Sewol ferry, aims at punishing people who conceal financial gains made through crimes. Under the bill, non-family members or a third party can be subject to legal punishment including seizures of property if they are found to have helped business owners gain profits through business malpractices. The bill was supported by 224 lawmakers while four opposed it and 17 abstained.

Of the three bills, the special Sewol law to form the investigative committee was the most difficult for the ruling and opposition parties to agree on. It took months for the two to reach a bipartisan deal that was also approved by the relatives of the Sewol victims.

Because of the political gridlock over the special law, not a single bill was passed for 151 days from May 2 through Sept. 30. The NPAD backed away from the two agreements reached with the Saenuri after facing rejections by the victims’ families, prolonging the parliamentary shutdown and leading Rep. Park Young-sun of the NPAD to resign from her post as its floor leader.

Though the special law was passed by a big margin, Rep. Ha Tae-kyung of the Saenuri Party expressed his objections to its passage in a speech before the vote. The first-term lawmaker argued the bill has elements that are unconstitutional, citing a clause that allows the investigative committee to fine people who refuse to come to committee hearings as witnesses 10 million won, about $9,000.

Ha cited a constitutional court ruling in 2008 that he said only allowed court-issued subpoenas to have such legal binding authority.

About 100 parents of the teenage Sewol victims and students from Danwon High School who escaped from the sinking ferry on April 16 watched the votes from the spectators’ gallery.

Many parents shed tears when Rep. Lee Sang-kyu of the Unified Progressive Party read a letter by the mother of one teenage victim asking to support the bill.