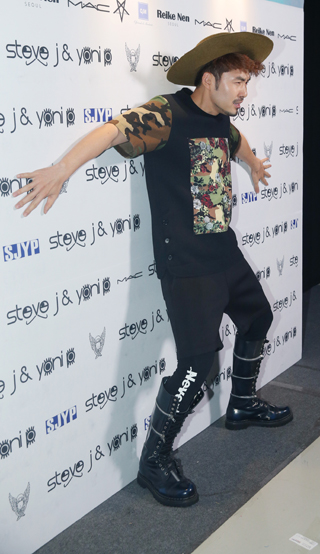 Entertainer Noh Hong-chul announced on Saturday that he would pull out of all the shows in which he was appearing after he was caught driving under the influence of alcohol on Friday night in Nonhyun-dong, southern Seoul.

Noh left a message Saturday on the official MBC website that read, “I apologize for disappointing viewers with my drunken driving. It was my decision to quit all my shows ... I will take time to reflect upon [my wrongdoings.]”

The entertainer’s two most popular programs, “Infinite Challenge” and “I Live Alone,” will be broadcast without him.

In response to the incident, Noh’s appearances were edited out of Saturday’s episode of “Infinite Challenge.”

According to the police, the 35-year-old was driving his Mercedes-Benz when he was caught by police on Friday night. He initially refused to take a Breathalyzer test; instead, he told police that he would undergo a blood test.

His blood test has been sent to the National Forensic Service.

“Infinite Challenge” will continue on with five members following Noh’s departure, though this is not the first time the show has seen a reduction in its ranks.

When Haha took time off to complete his military duty, the show aired for about two years with just five performers.

Haha’s absence presented some obstacles, however. On the program, the cast members are often paired up to perform certain challenges or missions. With just five entertainers, the producers opted to invite guest stars to fill the void.

Noh’s leave is also likely to affect viewership. The entertainer, full of positive energy, was good at eliciting laughs and outperforming his castmates on certain tasks.

Noh is the second “Infinite Challenge” performer to be involved in a drunken driving incident.

Gil Sung-joon, better known by his stage name Gil, quit the show in May after he was caught driving while intoxicated in Hapjeong-dong, Mapo District, western Seoul.