For e-sports star, fame is just part of game

For e-sports star, fame is just part of game 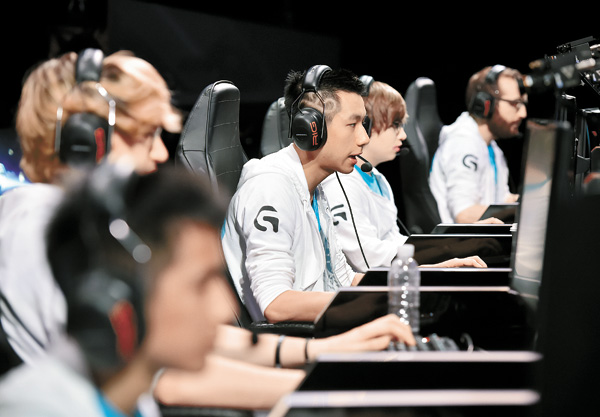 Hai Lam directs his team during a quarterfinal match against Korean team Samsung Galaxy Blue in the League of Legends World Championship at the Busan Bexco auditorium on Oct. 4. Cloud9 took home sixth place and 75,000 dollars in prize money. Provided by Riot Games

Hai Lam, one of the most famous professional gamers in the world, wants to be clear that he has a pretty normal life - except for the fans.

“There are a lot of different things that people make me do,” Lam explained in a phone interview with the Korea JoongAng Daily. “Sign their stomachs or sign their boobs, carry me, throw me on their shoulders, take pictures of me like that ... Some people can cry after meeting me. I think that’s insane.”

In addition to the fans, there’s much about Lam’s life that seems anything but average for a 22-year-old who never finished college. In the last six months, he’s been flown to places like Germany, Poland, Singapore and Korea. He competes in sold-out stadiums in front of thousands of people. He won’t say how much he makes but admits that players at his level regularly earn more than six figures per year.

All because of a computer game? 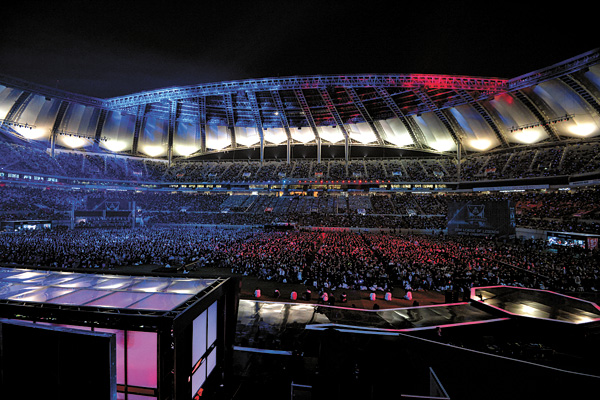 “I don’t know, it’s normal for the most part,” Lam shrugged.

If Lam sounds casual about his newfound fame, it’s probably because he never intended to be a superstar. Two years ago, he was just an average college kid who loved playing League of Legends, a complicated team-based computer game that resembles “Capture the Flag.” Unlike most college kids, though, Lam was good - so good that he decided to risk everything to play professionally.

What followed is a kind of universal success story of sacrifice, failure, achievement and, finally, acclaim. Perhaps the only thing that is unfamiliar about Lam’s story is that it didn’t play out on a football field or at the offices of a Silicon Valley start-up.

But as competitive gaming continues to push its way into the mainstream, stories like Lam’s are becoming more common.

The game’s popularity stems from a number of factors. It’s free to play and easy to learn, but because of constant tweaks by its American developer, Riot Games, it’s impossible to master. One of its more surprising appeals is the sense of global community that players frequently cite as what keeps them coming back. It is essentially a team sport - two groups of five compete against one another - that crosses geographic boundaries. Having logged onto the game’s servers, players can compete with the friend sitting next to them or with another player halfway around the globe.

It’s also fun to watch, which has contributed to its rise as one of the largest spectator events in the world, regularly drawing crowds and online streaming audiences comparable to, and at times far exceeding, those of traditional sports.

In October, more than 40,000 people flocked to a sold-out Seoul World Cup Stadium to watch this year’s World Championship, where a Korean team battled against a Chinese team for $1 million and a 70-pound trophy.

Ratings haven't been released for how many people streamed this year's final, but the number is likely to surpass last year's worldwide viewership of 32 million - more people than watched the Winter Olympics Opening Ceremony in the United States.

Professional gaming, also known as “e-sports,” may sound wild, but it’s not new - particularly to Korea.

As early as 2000, South Korea had a government-approved organization aimed at growing and legitimizing professional gaming, the Korea e-Sports Association. By the mid-2000s, Korean competitions in games like Starcraft were drawing thousands of spectators and hundreds of thousands of dollars in prize money.

What is unique about League of Legends, though, is both its global popularity and the increasing acceptance that it is more than just a computer game. It is considered a varsity sport at one U.S. college, Chicago’s Robert Morris University, which offers scholarships worth up to $19,000 per year to particularly talented gamers. There are burgeoning career paths as team managers or coaches, as well as “casters” who provide commentary for live events.


At the center of it all are players like Lam, most of whom have always loved playing video games but now have a viable means of turning their passion into lucrative careers.

It is, however, relatively self-selective; competing in League of Legends, just like any other high-level job, requires that players have the kind of tunnel vision that is unimaginable to people lacking passion for the game.

“[In order to turn pro] you lose a lot of your friends, you move away from your family, you lose your college experience, you lose your high school experience - whatever you were doing - and you basically drop everything,” Lam explained. “It’s exciting, but can be scary at the same time. … Your priorities and goals in life just change.”

Sometimes those sacrifices don’t pay off, just like they initially didn’t for Lam. He dropped out of Michigan State University in 2012 to give going pro a shot, leaving behind a number of close friends and straining his relationship with his girlfriend, which eventually didn’t work out.

In that first year, Lam’s team failed to qualify for the North American Regionals, the penultimate step to competing in the World Championship.

“[That loss] sucked a lot, honestly one of the worst days of my life! I remember it pretty clearly,” Lam wrote in a subsequent interview.

But Lam still loved the game. He decided to give playing professionally another chance. If it didn’t work out that year, Lam figured, he could return to Michigan, and to college.

This October, two years and two teams later, Lam finally made it to the World Championship quarterfinals in Busan, where his team took home sixth place and $75,000.

He’s already got his eyes on next year’s championship, but he said it’s impossible to predict what will happen then.

“Who will rise, and who will fall,” Lam wondered apocalyptically.

Later this month, he’ll be heading back to his team’s small California apartment-cum-training-facility with his four other teammates. They will be paid to play League of Legends for a minimum of 10 hours per day. Most will supplement their income by streaming additional matches online to viewers through services like Twitch.tv.

“It sounds boring,” Lam admitted. “But each game is different, and I think it’s fun. It might get a little bit tedious and monotonous after a while, but what job doesn’t, right?”

Lam’s job is, by his own account, a dream job, but it’s also one with a short lifespan. League of Legends requires reflexes so fast and a time commitment so massive that most professional players age out by their mid-20s. When Lim retires, he wants to continue to grow his team, Cloud9, into e-sports’ first household name. He wants Cloud9 to become “sort of like the Apple of [smartphones],” he explained.

He’s now taking some time off to travel, to “relax and have fun like a normal kid.”

When asked if anyone questions the legitimacy of his job, Lim shrugged it off. “You can’t really look down on successful people,” he said. “Life doesn’t really work like that.”