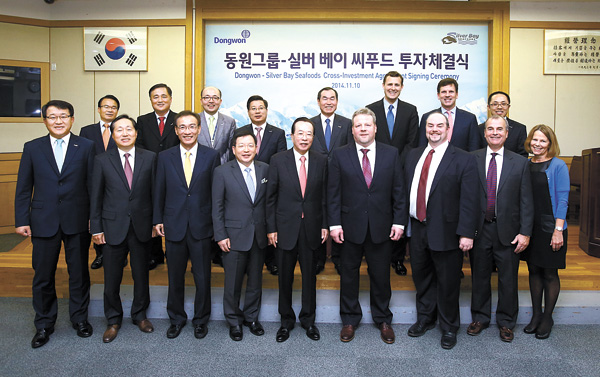 Dongwon Industries, the No. 1 player in the canned tuna market, is betting big on salmon by investing $20 million for a 12.5 percent stake in Silver Bay Seafoods, an Alaskan salmon processing company.

Under the deal, StarKist, Dongwon’s subsidiary based in the United States, will put up $12 million and Dongwon F&B will invest $8 million.

Korea’s canned salmon market was 7.8 billion won ($7.2 million) last year and is expected to rise to 60 billion won this year.

CJ had about 50 percent of the local salmon market last year, according to research firm Nielsen. Dongwon had 21 percent.

Dongwon expects the deal to improve the quality of its salmon products. Silver Bay Seafoods is founded and owned by fishermen, and is considered to be a major player in the salmon processing industry.

Dongwon Industries has 72 percent of the canned tuna market in Korea. The company’s businesses also include logistics, telecommunications and construction.