Park talks with Abe at an APEC dinner in Beijing

Park talks with Abe at an APEC dinner in Beijing 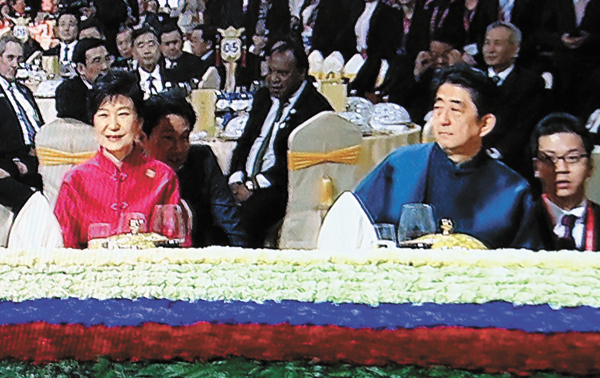 President Park Geun-hye and Japanese Prime Minister Shinzo Abe were seated side by side at a welcome banquet Monday evening in Beijing. This photo was taken from a TV screen in a press room. [Joint Press Corps]


BEIJING - President Park Geun-hye spoke with Japanese Prime Minister Shinzo Abe after he was seated next to her during a welcome banquet Monday evening at the Asia Pacific Economic Cooperation (APEC) meeting here.

According to the Blue House, the two leaders reportedly discussed a range of issues, including the Imperial Japanese Army’s enslavement of Korean women in military brothels during World War II, a subject that has been a key contributor to heightened tensions between the two nations.

This is the first time Park and Abe were seen publicly speaking since March in a trilateral meeting among Park, Abe and U.S. President Barack Obama in The Hague on the sidelines of the Nuclear Security Summit. Park has refused to hold a summit with Abe.

“President Park sat next to Prime Minister Abe during the APEC gala at the National Aquatics Center on Nov. 10 and discussed various issues,” said Min Kyung-wook, a presidential spokesman. “The two leaders agreed to encourage the smooth proceeding of director-general talks [between the two countries].”

Working-level talks kicked off in April to tackle Japan’s wartime enslavement of Korean women and the issue of compensation for the surviving victims. The dialogues, which were originally intended to be monthly, took place in May, July and September. The fifth, which was slated for October, was delayed due to opposition from some right-wing groups over specific historical details. The next meeting has yet to be arranged.

The conversation between Park and Abe on Monday was an ice-breaking moment, especially given that the president has remained largely skeptical about agreeing to Japan’s persistent offers for bilateral talks.

Park’s stance that an official apology from Tokyo to its wartime victims would only be a means to resolving strained bilateral relations faced an unexpected challenge after Chinese President Xi Jinping on Monday held a face-to-face meeting with Abe, the first since both took office. Xi urged Abe to follow a path of peaceful development and adopt prudent military and security policies, to which the Japanese prime minister responded that his country was determined to continue on a path of peaceful development. That Park and Abe were seated next to each other was no accident; world leaders were seated in alphabetical order by country.

Korea’s Ministry of Foreign Affairs was notified in advance about the seating arrangement for the welcome reception, and President Park was informed about the situation days earlier. A senior official with the ministry said the president independently opened a dialogue with her Japanese counterpart, selecting which themes to discuss and for how long. The move is a departure from Park’s past reactions toward the Japanese prime minister. When Abe greeted Park in Korean during trilateral talks at The Hague, she was unresponsive and maintained a rigid demeanor. It is anticipated that the encounter on Monday between the two could work to thaw long-strained ties and serve as the basis for the bilateral summit that Japan has long requested, despite mixed signals over its wartime history.