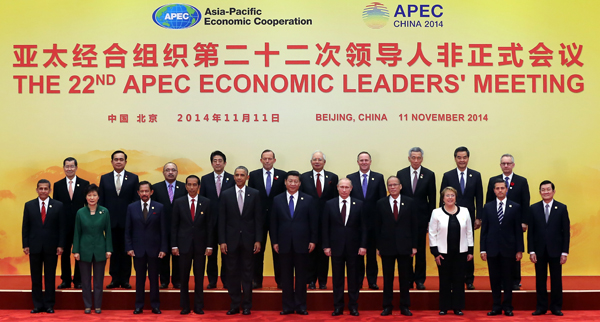 BEIJING - President Park Geun-hye yesterday declared her solid support for the China-led Free Trade Area of the Asia-Pacific (FTAAP), which she believes will serve as an effective means to accelerate the level of freedom for trade and investment within the region.

The president addressed regional leaders earlier yesterday at the beginning of the first session of the annual Asia-Pacific Economic Cooperation (APEC) summit, lauding China’s efforts to create a new growth engine for countries in the Asia-Pacific.

When addressing members at the APEC summit, Xi defined the integration of existing trade deals as one of the significant achievements of the international gathering this year.
China chaired the event this year, which it hopes it can use to assert a bigger leadership role in the international arena.

“Last year, I compared various ongoing free trade efforts to a tributary and the FTAAP to a large river,” Park said. “When free trade efforts are consolidated, the effect becomes much bigger. … In
this regard, I strongly support the road map Beijing has proposed toward the realization of the FTAAP.”

At the opening ceremony of the APEC summit yesterday morning, Xi called for progress on a “road map” toward closer economic integration among the group’s 21 member economies. China has stressed that the free trade area is compatible with existing regional free trade pacts between different countries, meaning it won’t deal a blow to those agreements, including the ones between Korea and
the United States as well as Korea and China.

As expected, President Park and U.S. President Barack Obama had a brief summit talk during the day.

“President Park and President Obama met after the luncheon and had meaningful conversation on pending issues,” presidential spokesman Min Kyung-wook said in a briefing, quoting Ju Chul-ki, the senior presidential secretary for foreign affairs and security.

During the 20-minute talk, conducted at a hotel near the APEC summit venue, the two leaders agreed to make joint efforts to denuclearize North Korea, said Min.

Min said the two leaders reached the consensus that it is important for international society to take a united stance against North Korea’s nuclear programs.

Before Min gave a briefing on the meeting in the evening, details of the talk between Park and Obama were not available for hours, with the foreign affairs and security office under the Blue House avoiding making a disclosure to the media.

But that wasn’t the only content that remained confidential for hours.

As questions piled up over when the meeting would occur, Blue House officials attempted to reduce its significance, saying it would be a casual encounter, given that Park and Obama were already engaged in conversation as they walked into the welcoming reception, which was held in a venue alongside the swimming stadium at the National Aquatics Center.

Even though Blue House officials repeatedly stated that the Park-Obama meeting would materialize yesterday, the issue of “exactly when” took a roller-coaster ride during the day until after Min announced at around 2:40 p.m. that the dialogue had already concluded, coming up with little detail.

This was the first time Obama appeared at the APEC conference in two years. He was forced to miss the meeting in October 2013 due to the federal government shutdown.

The U.S. president was set to have a one-on-one meeting with Chinese President Xi Jinping in the early evening yesterday. The two leaders agreed Monday to grant visas to each other’s citizens, valid for up to a decade, in a symbolic gesture to bolster trade and business transactions between the world’s two largest economies.