Samsung SDS closes at No. 6 in Kospi debut

Samsung SDS closes at No. 6 in Kospi debut 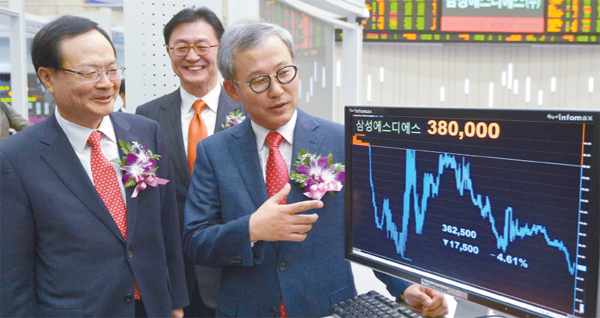 Samsung SDS, the IT service affiliate of Samsung Group, made a successful stock market debut yesterday as it became the sixth-largest company in terms of market capitalization.

The price of a debuting stock is set at between 90 percent and 200 percent of the IPO price before regular trading begins at 9 a.m.

At one point during morning trading, Samsung SDS stock rose to 382,500 won, claiming the fourth largest ranking in terms of market capitalization behind SK Hynix, but it declined sharply as retail and foreign investors kept offloading shares for profit-taking.

Shares closed at 327,500 won, down 13.82 percent. More than 1.3 trillion won worth of shares were traded, the highest in yesterday’s session.

Despite the large drop from the opening price, the company was able to reach market capitalization of more than 25 trillion won, the sixth-largest on the Seoul bourse behind steel giant Posco. Among Samsung affiliates, it passed Samsung Life Insurance to become No. 2 behind Samsung Electronics.

Analysts had a positive outlook for Samsung SDS stock, saying the company will a play a key role in the restructuring and succession process at Samsung Group. According to local financial information provider FnGuide, the average 12-month price target of Samsung SDS shares from nine local security firms was 429,000 won. E*Trade Securities had the highest target (500,000 won), while Eugene Investment & Securities and KTB Investment & Securities predicted the lowest (350,000 won).

“Samsung SDS isn’t a company that is at the top of Samsung Group’s ownership structure, but it is the company that is in the best position to maximize profits for the group’s major shareholders, so this will be a positive for the stock’s value,” said Eugene Securities analyst Yoon Hyuk-jin.

Analysts say the listing will help the three heirs pay their inheritance tax on assets passed down from the ailing chairman while cementing their control within the group. Based on the closing price of Samsung SDS shares, the heirs have secured more than 4.8 trillion won, of which Jay Y. Lee has 2.8 trillion won.

“Considering characteristics of the IT service industry that emphasize security, Samsung SDS will continuously generate sales,” said KDB Daewoo Securities analyst Jeong Dae-ro, who suggested 450,000 won for the Samsung SDS’s future value. “In particular, the company diversified its business portfolio by merging Samsung Networks and Samsung SNS, and this will create synergy with Samsung Electronics in communication business.”