Judges get ready for next K-pop star

Judges get ready for next K-pop star 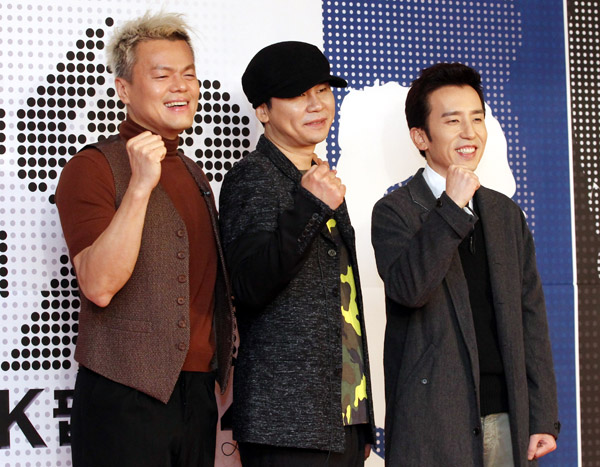 Park, the head of JYP Entertainment, which is home to musicians like 2AM, 2PM and Miss A, said, “I don’t think of it as a TV show, but I consider it an actual audition. I will give tips to young and talented participants.”

You, who runs Antenna Music and is himself a famous singer-songwriter, said, “This is an audition or a TV show for us, but I know it means everything to the participants.

“Since I understand that very well, I will do my best as a judge.”

Unlike Park and Yang, who have been judging the show since the first season, You joined last season as a replacement for Boa, a singer from SM Entertainment.

Yang, the head of YG Entertainment, which has the artists Psy, Big Bang and 2NE1, said, “I would say this fourth season is probably the best so far.”

Hi Suhyun, a new spin-off group from YG, is made up of K-pop Star participants. Lee Hi was a runner-up from the first season of K-pop Star while Lee Su-hyun won the third season.

The fourth season will begin airing on Sunday at 4:50 p.m. on SBS.